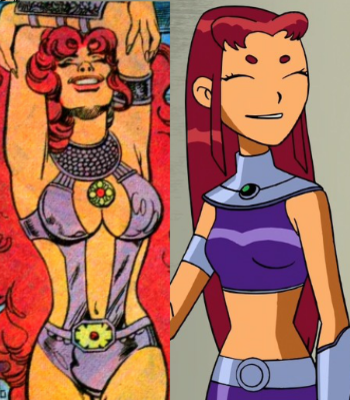 Crafting a quality adaptation can be a tricky process, one that often brings with it many things to consider. Between media, there are not only different techniques but also different standards about what is acceptable for certain audiences, especially when it comes to nudity or otherwise sexual content.

This is where Adaptational Modesty comes into play. It can involve things like making the revealing outfits of the resident Ms. Fanservice slightly less revealing, or reducing what was a lengthy and detailed sex scene in the original work to a Sexy Discretion Shot. Other times, it can be something as simple as putting clothes on a character in scenes where the character was actually naked in the original material.

It is most problematic if the clothing in question is heavily associated with the character. Taking away or changing it too much leaves them as not having their iconic look. Wonder Woman has had a long history of trying to stay true to her classic look while making the outfit look more practical and protective.

This trope often comes into play with film or television adaptations of literature or comic books, since ideas about what is generally acceptable tend to differ among these media. This usually overlaps with Pragmatic Adaptation. The human body cannot usually replicate the impossibly perfect shapes of a drawing. Some outfits are wildly impractical, simply would not stay in place in a live-action context, or would simply look silly if replicated exactly. Excessive Fanservice can be distracting and take away from the intended artistic merit of the production. Also often invoked when working with child actors, because of laws regarding minors in show business, and the disastrous effect on viewership and the creators' careers in most of the world that would happen if a work got a reputation for sexualizing children.

Compare Bowdlerization, which is applied to edits applied to the original work. Related to Lighter and Softer, Tamer and Chaster and, on a career level, Bleached Underpants. A very specific inversion of Hotter and Sexier.