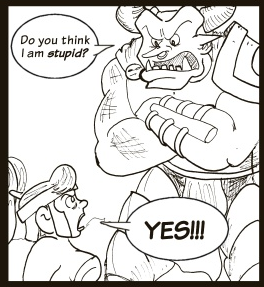 Gambol: You think you can steal from us and just walk away?!
The Joker: Yeah.
— The Dark Knight

To whoever is asking the question, a more appropriate answer would probably be either a "no", a "maybe", or in some cases no answer at all. Instead, however, it's answered with a blunt "Yes," or whatever else would be equivalent to "yes" in its own context. (For example, if Alice asks "Have you no shame?" Bob saying "No" or "None!" would count.) Normally followed by Alice's dumbfounded or dejected acceptance of Bob's answer.

Maybe this reflects on differences between the asker and the answerer in terms of views toward the subject they are discussing. Maybe it implies that the answerer has a very blunt personality, such as that of a Deadpan Snarker, for instance, or is an unrepentant individual who doesn't bother to excuse their actions when questioned about them. Sometimes it could mean both, and by its very nature often does.

Truth in Television, of course, especially in online discussions, given the sheer diversity of opinions, and in turn, higher rate at which what one would consider an inappropriate response, another considers quite fitting.

May overlap with At Least I Admit It or I Can Live With That.

Often a subtrope of Rhetorical Question Blunder, such as Does That Sound Like Fun to You? May be used as an Armor-Piercing Response to shut down an Armor-Piercing Question, and may or may not involve deliberately invoking Rhetorical Question Blunder. Compare with Insult Backfire, since it is often caused by similar things. Often associated with Brutal Honesty. See also Flat "What", Little "No", Quick Draw Decision. Compare Mathematician's Answer.

...and the Cinema Snob's answer.

...and the Cinema Snob's answer.