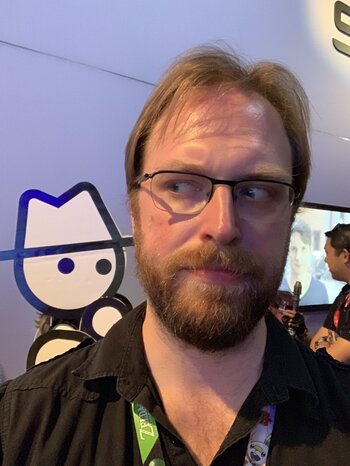 "... but as I sat in my office waiting for the phone to ring, miserably holding it in, it occurred to me that the whole reason I became an artist was to take all of my inner pains and miseries and force the rest of the world to share them. It's something I have in common with spree killers."
— Yahtzee's Dev Diary, Episode 17
Advertisement:

The British-born and US (formerly Australian)-residing Benjamin Richard "Yahtzee" Croshaw (born 24 May 1983) is perhaps best known for Zero Punctuation. But he does have a bit more on his conscience internet-wise. Besides being a video game critic, Yahtzee also has experience in the field of writing and game design. Most of this work (and a bit more) can be accessed through his personal site: Fully Ramblomatic.com

. In addition, he did a Let's Play series in his spare time called Let's Drown Out, which can be found on his YouTube channel here.

The series has since ended due to Yahtzee's move to America, with the final episode having been uploaded on August 27th, 2016.

He was also one of the founders of the Mana Bar, a place where people can drink and play games. After initial success in Brisbane, Mana Bar Melbourne had its grand opening on July 16, 2011, a success that saw a line to get in that ran around the block. The bar unfortunately closed its doors on May 24, 2015.

Yahtzee also makes his own games, mostly adventure games. They include the Chzo Mythos, Adventures in the Galaxy of Fantabulous Wonderment, 1213, and the Mythos' Gaiden Game, The Art of Theft, among others. All of these can be found at Yahtzee's personal site/blog, Fully Ramblomatic.com

He has also written a novel, Mogworld, released by Dark Horse Books in August 2010. It is not a comic/graphic novel, as one might expect coming from Dark Horse, but a "proper wordy thinky brainy book" and "an idea I've been kicking around ever since those dark, unproductive three months I spent playing World of Warcraft. It's a bit of a cynical take on MMOs and the standard Tolkienesque 'fantasy' setting." More info can be found here

Croshaw's second novel, Jam, was released in October 2012. In his words, the book is "about an apocalypse. With jam in it."

His third novel, Will Save the Galaxy for Food, was released in February 2017.

His fourth novel, Differently Morphous, was released on Audible in March 2018; a paper release is forthcoming in 2019.

His fifth novel, Will Destroy the Galaxy for Cash, was released in 2019.

Not to be confused with the board game Yahtzee.