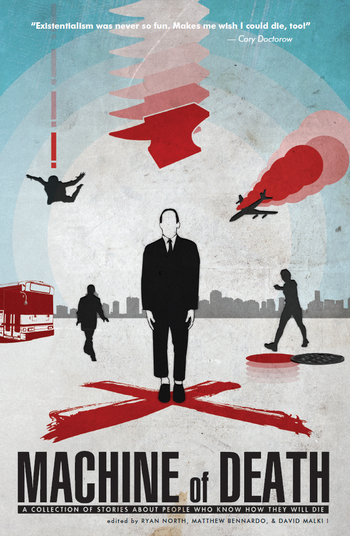 Machine of Death is an anthology of short stories released in 2010, edited by Ryan North (Dinosaur Comics), Matthew Bennardo, and David Malki ! (Wondermark, Tweet Me Harder).

The anthology is centered on a premise from one episode of North's Dinosaur Comics: A machine exists, capable of predicting a person's future cause of death through a simple blood test and revealing it via a few words printed on a simple white notecard. The machine's predictions are completely infallible and always correct, though they are not always as straightforward as they seem: for example, "old age" could mean anything from an uneventful death of natural causes to murder by an octogenarian, and such ironic and unusual deaths abound.

The stories in the collection were selected from nearly 700 submissions. Each story is accompanied by an illustration, many of them by well-known webcomic artists. It is available online as a free ebook

, while an audiobook version is being distributed as a series of podcasts

A second anthology (or a second volume of the same anthology, depending on your perspective), titled This Is How You Die, was released on July 16th, 2013. This volume included a number of short standalone comic strips between some of the stories.

List of stories
The name after the author's name is that of the illustrator.

This Is How You Die

This anthology's frame story or the shared elements of the stories contains examples of:

The individual stories contain examples of:

Alternative Title(s): This Is How You Die