Literature / Will Save the Galaxy for Food 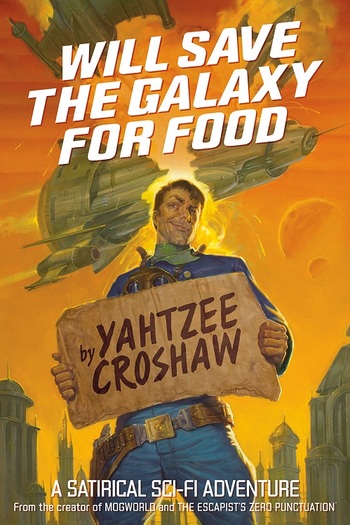 Not your traditional sci-fi hero.
"I just stopped remembering."
Advertisement:

Will Save the Galaxy for Food, published February 2017, is the third published novel by Ben "Yahtzee" Croshaw, a satirical sci-fi space adventure set in a world where star pilots are no longer needed because of widespread teleportation, called in-universe as "Quantunnelling". Our hero is a down on his luck pilot trying to get by and getting embroiled in increasingly complex power-plays and misadventures. And he ain't happy about it, starting with having to impersonate a Jacques McKeown, an author who steals stories from other pilots, so they all hate him.

A sequel, Will Destroy the Galaxy for Cash, was released in September 2019.