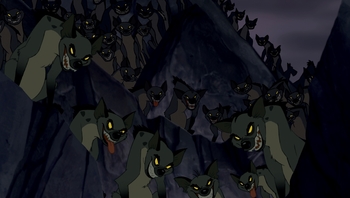 A common concept of the sci-fi and fantasy genres (and especially games of those genres) is the notion of not an organization, not a clan, not a city, but an entire race of bad guys who brag about how Evil they are.

Though the Trope Namer is Dungeons & Dragons, this trope is actually Older Than Dirt — one would be hard pressed to find any myths or folk tales that don't have some creatures that are portrayed as always evil.

Note that the race can also be Lawful Evil or Neutral Evil. In fact, 99% of the time, it will be a race that simply is evil to the core, with some individual differences in their stances on Order Versus Chaos. The orcs in The Lord of the Rings are a perfect example: they are arguably a Lawful Evil race overall, even if individual members are not. Just because there's an army of Lawful Good humans, doesn't mean that the evil army that opposes them can't also be lawful. It must be said that merely showing an evil, conquering army is not enough to prove this trope, so long as a doubt that everyone of the same nationality or race approves remains. They are part of the same group after all, of course they would share the same beliefs. Nor does showing a few evil members of a species proves that this species qualifies. It must be beyond the shadow of a doubt, that this holds true for every single individual, and in the well-done cases even justified. Also a variation playing with this trope is of creatures having basically the same background, but some choosing evil and transforming into something different.

How, exactly, these folk have unanimously embraced one ethos (especially one so detrimental to the survival of the group), when humans have been known to kill each other over the kind of hip-hop they prefer, is often unknown and inconsequential. When the ethos is justified, often the race is explicitly artificial in origin, rather than natural. Their nature is determined by the evil individual who created them as slaves/warriors/etc. — thus dodging the problem that Children Are Innocent. This is often reinforced by having their society believe in Asskicking Equals Authority... and in this case, anyone weak (good) will be killed very quickly.

One must consider that morality exists due to the fact that humans are social animals. Parents care for their offspring so they can grow up strong and so they can teach them lessons that they would otherwise have to work out for themselves. A tribe of hunter/gatherers pools the food it gathers and splits it so those that don't get much one day due to bad luck will be in good condition to get some tomorrow. Farmers raise crops and feed a blacksmith who forges tools so said farmers can better till the land. Society is built on said interactions, but all of which is predicated on interactions going smoothly and being unlikely to end in one side murdering the other for momentary gain or a laugh. In that case the rational thing to do is to avoid others of your kind like a plague.

Expect the national dress to be Spikes of Villainy and black leather, the reason for keeping pets to be kicking, and their language to be the Black Speech.

The Defector from Decadence typically comes from this stock, usually with some qualifier, or after having become an Ascended Demon. Having an ancestor from such a race usually qualifies a character's evil (or potential for it) as being part of a Villainous Lineage.

It's quite common for a fantasy Big Bad to have an Always Chaotic Evil race at the ready to use as mooks (possibly even engineered by them). It's usually justified as an arrangement among the various Powers That Be. The heroes are likely to be from races where good and evil are possible, to contrast their differences.

May be the subject of a Genocide Dilemma, sometimes going so far that a Final Solution against the defined-as-evil race is portrayed in a quite cheerful light. This is Planet of Hats when evil is the hat. For evil professions like pirates and hitmen, see Villain by Default. For cases where humanity, aliens, or predators really are this trope, see Humans Are the Real Monsters, Aliens Are Bastards and Predators Are Mean respectively. For tropes that include cases where animals are depicted as Always Chaotic Evil, see Bears Are Bad News, Cats Are Mean, Savage Wolves, Wicked Weasel, Wicked Wasps, You Dirty Rat!, and Reptiles Are Abhorrent.

Be careful when writing these: may lead to Unfortunate Implications; for some of the methods by which authors attempt to avoid said Implications, see this Analysis page.

See also What Measure Is a Non-Human?, Hard-Coded Hostility, My Species Doth Protest Too Much, Dehumanization, and Scary Dogmatic Aliens. If the trope's subjects are a distinct species as opposed to an ethnicity, their reasons for being this may be Blue-and-Orange Morality. Compare Lawful Stupid, Chaotic Stupid. Contrast Always Lawful Good. Should not be confused with Chaotic Evil.

For subversions of this trope, when it turns out that an enemy race is not necessarily bad, see Not Always Evil and Token Heroic Orc.

Add Examples, ya scum! Get crackin! If He catches you lollygagging, you knows what will happen!

In "Fantasy Races", orcs are evil by their very nature.

In "Fantasy Races", orcs are evil by their very nature.