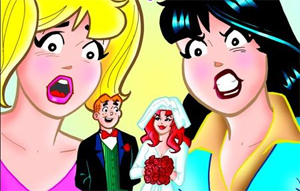 Bob is in a Love Triangle with two girls, Alice and Carol, who often have a Betty and Veronica dynamic. He likes both of them, and both of them like him, and he can never, ever choose between them. While this dynamic has plenty of dramatic potential, on occasion the writers will want to shake it up a bit. To avoid showing favoritism to either of Bob's existing love interests, they may have him fall for a third girl: the Third-Option Love Interest, Donna, whose job is to shake up the status quo of the relationship and breathe new life into it by tempting the vertex of a love triangle to Take a Third Option. From the perspective of fan reaction, this can be very risky. Alice and Carol are likely to both have established fanbases, and as such pairing Bob with some new girl who lacks this built-in support runs the risk of alienating everybody.

The Third-Option Love Interest can be of either gender depending on the initial triangle. They can sometimes even overlap with the Gay Option.

May lead to a Love Dodecahedron… or, since Status Quo Is God, Donna may be Put on a Bus, leaving the original two Love Interests to duke it out. Sometimes Alice and Carol will lay aside their rivalry and unite against the interloper—each would rather lose Bob to the other than to anyone else. However, in some cases Donna/Bob will become the Official Couple.

In Fan Fic, the Third-Option Love Interest is a frequent target of Die for Our Ship, since both Alice/Bob and Carol/Bob shippers will descend on her with the fury of Hell. Also, expect accusations of the character being a Canon Relationship Sue (which may or may not be true). May also be Third-Option Adaptation. Often the result of being a Chick Magnet.