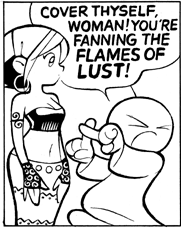 A character with this state of mind believes that Sex Is Evil, but can't escape their own sexuality. This forces the character into a couple difficult dilemmas, which they may resolve in any combination.

Needless to say, these characters operate under ethical guidelines completely opposite to those of an Ethical Slut.

The character isn't necessarily a rapist (though they might well fear becoming one if they aren't careful); it's enough for them to be a Jerkass about their sexuality under the presumption that Sex Is Evil, "unmarried non-virgins are whores", or similar. They are likely to eventually take it out on their partner(s), themselves, or both.

If they do commit sexual harassment or worse, they might be Obliviously Evil about it. They are likely to show their consideration by choosing victims who are already Defiled Forever, so that some extra abuse won't make any difference… to them, that is.

In a setting where Sex Is Evil, this character will exemplify the evils of sexuality. If they make a Heel–Face Turn and become good, they are likely to forgive their victims for "tempting" them. In a setting where sex is not evil, the character is likely to be contrasted with a Chivalrous Pervert, Good Bad Girl, or fully operational Ethical Slut.

A character with this mindset is likely to think that at least some men are incapable of controlling their sexual urges, so women should expect them to commit sexual harassment or worse and be Crazy-Prepared in various ways, such as second-guess what these men might find attractive and then try her best to not look attractive, lest these men get their urges. Some particularly unsympathetic or tragic characters may take this attitude one step further, demanding the Double Think that we should all consider men to be some kind of monsters while still considering them to be the superior gender—morally and otherwise. This is done by blaming women for "tempting" men (by their appearance or even their mere existence) and thus making any sex-crimes against them their own fault. Naturally, many works portray this attitude as barbaric misogyny.

While this trope seems like it would fall into the "Always Male" category, and traditionally it was, female examples do exist.

Makes for a particularly tragic Politically Incorrect Villain — or Anti-Villain. See also Armoured Closet Gay, Troubled Sympathetic Bigot, Then Let Me Be Evil, and Internalized Categorism. Contrast the two tropes that oppose this one, Celibate Hero ("I Don't Need Sex But You Can Have It, Just Not With Me") and Ethical Slut and Chivalrous Pervert ("Sex Is Not Evil, And I Am Horny"). Contrast Romanticized Abuse for when abusive sexual gratification is played for fetish appeal rather than angst, contrast the polar opposite I'm a Man; I Can't Help It when the male character doesn't even try to keep his sexual urges in check. Compare and contrast Why Did You Make Me Hit You?, which is more about "Violence Is Evil And I Am Angry." This can lead to a case of Romance and Sexuality Separation.

In many cases, this trope comes with religious connections. Many religions have specific rules regarding sex, and some go so far as to claim that sex is inherently wrong (with perhaps a grudging acceptance of the fact that there needs to be some sex in order to create the next generation, but you're not supposed to enjoy it).

No Real Life examples, please. But examples of how real cases have been portrayed in media are okay.