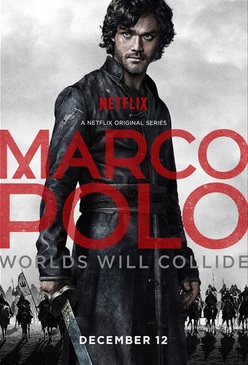 Marco Polo is an action-adventure series produced by The Weinstein Company and aired on Netflix. It represented Netflix's biggest charge yet into original programming, the first season costing $90 million to produce over its 10 episodes. It starred Lorenzo Richelmy as the title character, Benedict Wong as Kublai Khan and was created by John Fusco, writer of the films Hidalgo and The Forbidden Kingdom, among others.
Advertisement:

It is a fictionalization of Marco Polo's early years, while in the service of Kublai Khan.

While not a hit with critics

, it was still a hit with audiences and successful enough for Netflix that a second season was greenlit in January, 2015, to stream on July 1, 2016. Unfortunately, viewing numbers still fell far short of the show's expense and it was cancelled, giving it the dubious distinction of the first Netflix series to not make it to a third season.

Do not confuse this series with the Shaw Brothers movie from 1975.