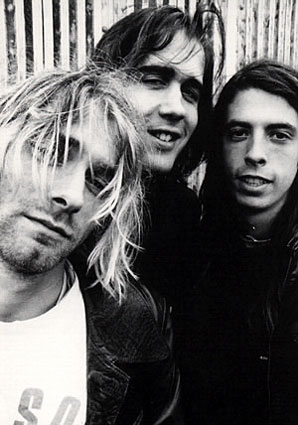 The classic line-up of Nirvana. From left to right: Kurt Cobain, Krist Novoselic, and Dave Grohl.
"It's better to burn out than to fade away."
— Kurt Cobain, quoting Neil Young, in his suicide note.

Nirvana was a grunge band formed in Aberdeen, Washington up in the Pacific Northwestnote not Seattle, as is commonly assumed, though Seattle is where they first hit it big, regularly considered among the upper echelons of modern rock music for their popularizing and influencing the grunge and Alternative Rock scenes of The '90s, most prominently with their smash hit 1991 album Nevermind.

The trio of guitarist and frontman Kurt Cobain, bassist Krist Novoselic, and a revolving door of drummers (eventually settling on Dave Grohl) would become the face of the '90s grunge movement. The group is most well known for the songs "Smells Like Teen Spirit", "Come as You Are", "Heart-Shaped Box", and "You Know You're Right".

Nirvana was one of the first bands many members of Generation Y got into, despite the band often being labeled a Generation X phenomenon — which is also inaccurate in the sense that a much larger number of Gen-X'ers grew up with the Hair Metal and flamboyant pop that Nirvana ushered out in the early '90s.

Although the band disbanded following Cobain's death in April 1994, the band still remained popular, releasing many compilation and live albums, and Grohl would go on to form Foo Fighters, one of the most respected and successful alt-rock acts of the genre.