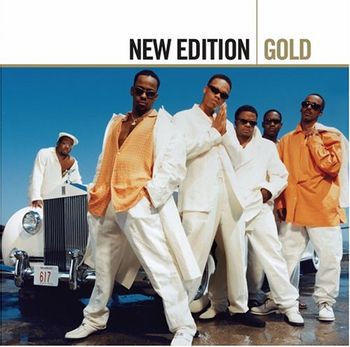 Ronnie, Bobby, Ricky, and Mike
If I like the girl, who cares who you like?
— Ralph, "Cool It Now"
Advertisement:

New Edition is an American R&B male music group formed in Boston, Massachusetts in 1978, that was most popular during the 1980s. They were the progenitors of the boy band movement of the 1980s and 1990s and led the way for groups like New Kids on the Block and Boyz II Men. At the height of their early popularity in 1983, the group consisted of Ricky Bell, Michael Bivins, Bobby Brown, Ronnie DeVoe, and Ralph Tresvant. Early hits included songs like 1983's "Candy Girl" and 1984's "Cool It Now".

The group would perform all around Massachusetts and would eventually land a spot at a talent show which was run by Maurice Starr. The first prize was $500.00 and a recording contract. Though New Edition came in 2nd place, Starr decided to bring the group to his studio the following day to record what would become their debut album, Candy Girl. Recorded in late 1982 and released in 1983 on Starr’s Streetwise Records, the album featured the hits: "Is This The End," "Popcorn Love," "Jealous Girl" and the title track, which went to number one on both the American R&B singles chart and the UK singles chart.

Returning from their first major concert tour, the boys were dropped back off to their homes in the projects and were given a check in the amount of $1.87 a piece for their efforts. Tour budget and expenses were given as the explanation as to why they were not paid more. Due to financial reasons, New Edition parted company with Starr in 1984 (Starr responded by promptly creating the group New Kids on the Block; essentially formatted after New Edition, but with white teenagers.) The group, meanwhile, hired the law-firm of Steven and Martin Machat and sued Streetwise for relief from a contract that was unenforceable as well as materially breached by Streetwise. The Machat's won the legal game and then secured the group a huge recording deal with MCA after holding a bidding war among all the major recording labels. The band, in need of management, signed with Steven Machat and his two management partners Rick Smith and Bill Dern. The management company was called AMI and AMI proceeds to break the group both in the urban and pop world. MCA, through the production affiliate of AMI, Jump and Shoot, released the groups self titled second album the same year. Eclipsing their debut album, New Edition spun off the top five hit "Cool It Now" and the top twenty "Mr. Telephone Man," and went on to be certified double platinum in the United States.

In December 1985, under pressure from MCA and their management, the group voted Bobby Brown out, due to behavioral problems (a move they regretted years later according to Michael Bivins). Brown left in late 1985 to embark on a successful solo career in 1986, while New Edition continued to promote All for Love as a quartet. In spite of their financial and internal conflicts, New Edition continued to peak. During this era of the group's evolution, the group appeared in the episode of Knight Rider titled "Knight Song", performing "Count Me Out." As 1986 wound to a close, they recorded a cover of The Penguins 1954 hit "Earth Angel" for the soundtrack to The Karate Kid, Part II. The song peaked at #21 and inspired the group to record Under the Blue Moon, an album of doo-wop covers. The group continued for a time with four members, but eventually recruited singer Johnny Gill to record their 1988 album Heart Break. The group went on hiatus in 1990, while its various members worked on side projects, such as the group Bell Biv DeVoe. Gill and Tresvant also recorded successful solo albums.

The group, including Bobby Brown, reunited in 1996-1997 for the album Home Again, but during the ill-fated follow-up tour both Brown and Bivins quit the group, and the tour had to be canceled. Various reunions have occurred since, usually with the 1987-1990 lineup, though occasionally also including Bobby Brown. Their last studio release was 2004's One Love. By 2010, two New Edition descendants were recording and touring: Bell Biv DeVoe, and Heads of State (featuring Brown, Tresvant, and Gill). Since 2011, all six members have toured on-and-off as New Edition.

In 2017, BET produced a Biopic Mini Series about the group, The New Edition Story, that chronicles many of the above events.

In 2019, it was revealed all of NE's masters, both material from the group and all solo work, sans Johnny Gill's, were destroyed in a 2008 fire at Universal Studios, making any future remasters of their works impossible.