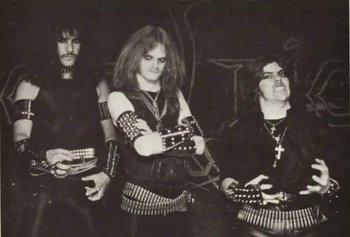 Celtic Frost was founded by guitarist Tom Gabriel Fischer after he had left the band Hellhammer. He formed the band with Martin Eric Ain and Stephen Priestly to record the mini-LP Morbid Tales, which garnered interest in the undeground metal scene. A year later, they released the highly influential To Mega Therion. With full attention on them, they released the highly avant-garde Into the Pandemonium, which featured classical instruments, operatic female vocals, and sampling. Despite this, Into the Pandemonium is still held in high regards by fans. They eventually went on a tour to America. Because of this and many internal and external conflicts in the band, they released the album Cold Lake. This album adopted many of the hair metal elements that were being used by many American metal bands at the time. This alienated their strong fanbase in Europe yet the album sold well in America. They soon released the album Vanity / Nemesis which combined the elements of Cold Lake and their earlier albums, but they still could not regain the popularity they had years before. Their final album they released before breaking up was Parched With Thirst I Am Dying, which contained unreleased material, re-recordings of older songs, studio versions. Their final album was to be titled Under Apollyon's Sun, but it never came to fruition. They eventually reunited in 2001 and began writing material for a new album, which resulted in Monotheist, a return to their original style, but much darker, with elements of Doom Metal. This was only short lived, because as of 2008, Tom and Martin decided to lay Celtic Frost to rest for good, with Martin's tragic passing on October 22nd, 2017 confirming it for good.

This band contains examples of...