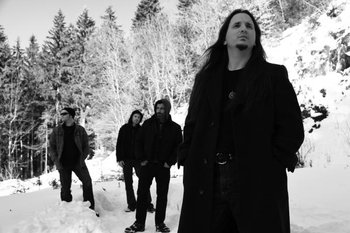 Agalloch were a rather eclectic metal band from The United States, known for their unique fusion of black metal, folk metal, and post-metal into a sound that many refer to as "dark metal." Their songs are typically long, featuring traditional elements of black metal such as tremolo picked guitars and blastbeats alongside more unusual folk instrumentation (including a deer skull on a couple songs) and song structures reminiscent of post-rock. They use a mixture of harsh and clean vocals in most of their songs and write mainly about the beauty of nature, winter, solitude, and ancestral paganism. To date, they have released five full-length albums, four EP's, and two singles, along with a gaggle of demos and split releases.

On May 13th of 2016, after 20 years of creating music, the band unexpectedly decided to break up.

Their releases so far include: