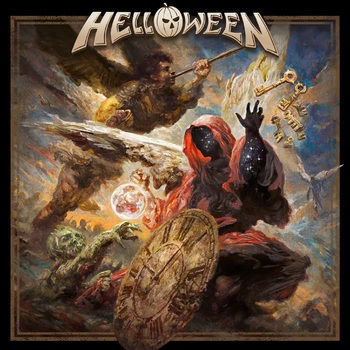 Helloween is a German power/speed metal band. Alongside Switzerland's Celtic Frost and Sweden's Bathory, Germany's Helloween were possibly the most influential heavy metal band to come out of Europe during the 1980s. By taking the hard riffing and minor key melodies handed down from metal masters like Judas Priest and Iron Maiden, then infusing them with the speed and energy introduced by the burgeoning thrash metal movement, Helloween crystallized the sonic ingredients of what is now known as Power Metal.

The band has its roots in 1978, under the name Gentry, by Kai Hansen and Piet Sielck. Sometime later, they were joined by bassist Markus Grosskopf and drummer Ingo Schiwchtenberg, and changed the name again, this time to Second Hell. There was another change in the name (Iron Fist) before the definitive took of the name Helloween. From this point, Sielck left the band. Michael Weikath, who was playing in the band Powerfool, joined them after the disbandment of his band. And so, the first line-up (and official birth) of Helloween was formed, in 1984.

This lineup (Hansen-Weikath-Grosskopf-Schwichtenberg) collaborated in a compilation, (Death Metal, alongside Hellhammer, Running Wild and Dark Avenger) and released two EPs (Helloween and Judas) and a studio album (Walls of Jericho) before another lineup change.

Kai Hansen, foresawing the difficulties to take the lead guitar and singing roles, decided to focus just on the guitar part, and so the search for a new vocalist begun, which ended in the former Ill Prophecy singer Michael Kiske being hired. This lineup change was key in the band's success, with the albums Keeper of the Seven Keys Pt. 1 and Keeper of the Seven Keys Pt. 2.

Sadly, just as they were on the verge of breaking to a wider audience — even flirting with American success — the band's meteoric rise was rudely interrupted by internal strife and a string of bad business decisions. Hiring Kiske ultimately proved a double-edged sword — his iconic work with the aforementioned Keeper albums was what set up said meteoric rise in the first place, but he then decided he wanted to move away from Power Metal towards a lighter Hard Rock, a decision which cost them the departure of Kai Hansen, who would later start Gamma Ray, with Roland Grapow, from Rampage, replacing him. And to top it all, the band was also in a legal dispute with Noise Records about a bunch of nasty legal stuff, which resulted in them not being able to release anything for some time. Everything resulted in two disastrously mellow albums (Pink Bubbles Go Ape and Chameleon) which are best not discussed, even by the band themselves, and very nearly finished off the band. As a result of this, both Kiske and Ingo were sacked for the band, although for different reasons. Kiske was fired because Michael Weikath refused to work with him any further, while Ingo was released due to mental and drug-related issues.

However, this was not the end of the band. Michael Weikath took the control of the band and hired the singer Andreas "Andi" Deris, from the band Pink Cream 69, as well as ex-Gamma Ray drummer Uli Kusch. This change made the band to return to their roots, and continued to prosper in the international metal arena on their own terms, with the release of the album Master of the Rings. More importantly, they remained the benchmark by which most every power metal band is still measured.

In 1995, however, there was sad news: Ingo Schwichtenberg was profoundly depressed and committed suicide by throwing himself to the subway rails. This hit hard in the band, who dedicated the album The Time Of The Oath (a Concept Album about a Nostradamus prophecy) to his memory.

1998 saw the release of the succesor of Time..., Better Than Raw. It's considered the highest point of the band in The '90s.

1999 saw the band celebrating fifteen years of music, thus it was a perfect occasion to release something. This something was a Cover Album called Metal Jukebox, containing metalized covers from numbers such as ABBA, Jethro Tull, David Bowie.

2000 saw the latest release with this lineup: the Darker and Edgier The Dark Ride. It was the last album with both Roland Grapow and Uli Kusch, since they both were sacked from the band. They went later to form the acclaimed Masterplan.

Sascha Gerstner from Freedom Call replaced Grapow, but the band struggled with the position of drummer. The first drummer hired was Mark Cross from Metalium, who abandoned the band after some medical issues. Finally, Stefan Schwarzmann (formerly from Accept, and Running Wild, among plenty of other bands) took the role, although he wasn't hired in time for the recording sessions of Rabbit Don't Come Easy, the follow-up to Dark, where the drums were played by Mikkey Dee.

The final lineup change came in the form of Dani Löble, from Rawhead REXX, replacing Stefan, who left the band for Creative Differences. This lineup survives to our days, and recorded five albums (Keeper of the Seven Keys Pt. 3: The Legacy, Gambling With The Devil, 7 Sinners, Straight Out of Hell and My God-Given Right) and a Lighter and Softer compilation album called Unarmed.

In 2016, Kai Hansen and Michael Kiske rejoined the band and recorded a new single, "Pumpkins United", along with the band embarking on a world tour of the same name. The band's three-vocalist, three-guitarist "Pumpkins United" configuration has announced a new album, simply titled Helloween, for release in 2021.

Today, they're known for never having grown up or received the memo that it's no longer the 80s. Their over-the-top bombastic performances, Large Ham antics, and absolutely hilarious music videos are essentially what would happen if Limozeen were a real band.