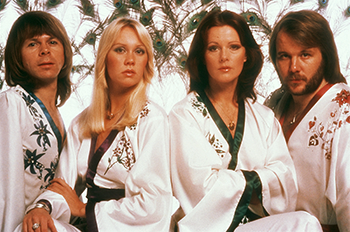 (left to right): Björn Ulvaeus, Agnetha Fältskog, Anni-Frid "Frida" Lyngstad, and Benny Andersson
"It was very unfashionable to like Abba at that time. Their songs are beautifully crafted and the production was always immaculate, everything beautifully tuned in time, and the girls' voices were fabulous."
— Brian May
Advertisement:

There's quite a long story behind their name, actually. The band was originally known, rather awkwardly, as "Björn & Benny, Agnetha & Anni-Frid". This is the banner under which they released their first few singles and debut album Ring Ring. Afterwards, the name "ABBA" was coined, partially as an acronym of the group's first names, and also as something as a joke, because Abba was also the name of a Swedish fish-canning company. Since the company was pretty much unknown outside of Sweden, it was thought that the name would work on international markets. The group had to ask for permission to use the name.note Also not to be confused with the Swedish-Swiss electrical manufacturer

In 1970, the group traveled around Sweden and Denmark as a cabaret revue called "Festfolket" (Party People). Audiences preferred their singing to their comedy skits. They first shot to international attention in 1974 by winning the Eurovision Song Contest with "Waterloo". Rapid success followed over the next few years in Europe and Australia and (to a lesser degree) the United States with a run of huge hits like "Dancing Queen", "Fernando" and "Mamma Mia". The fact that the band consisted of two Creator Couples didn't hurt. A European and Australian tour in 1977 led to a feature film and massive sell-out concerts.

By the end of the decade, the group had matured artistically, moving away from the light-hearted songs of the early years and towards heavier themes. Internal affairs had turned Darker and Edgier as well: Agnetha and Björn divorced in 1980; Benny and Frida followed suit a year later. "The Winner Takes It All", a bittersweet ballad about the end of a romance (generally assumed to be based on Agnetha and Björn's divorce) is considered by many to be the artistic peak of the group.

ABBA did not officially break up— and despite the two divorces, all four members remained friends— but by 1983 they had essentially dissolved. The former members would go on to have mixed careers and, despite occasional joint public appearances, refrained from getting back together despite a reported offer in 2000 of $1,000,000,000 (yes, you read that right, that's a billion dollars) to do a reunion tour consisting of 100 concerts. ...Until June 2016

, when Frida and Agnetha reunited to perform one song ("The Way Old Friends Do") at a party to celebrate Benny and Björn's fifty years of friendship. In 2018, the band stunned fans with the announcement that they reunited

for the recording of two new songs, "I Still Have Faith In You" and "Don't Shut Me Down". These tracks would eventually be released in 2021 as the lead singles of that November's Voyage, their first album of new material in 39 years. Although Benny and Björn have stated they believe Voyage will ultimately be their final album as a foursome, Frida has suggested that that she could be convinced to return for another.

And in terms of popular culture, ABBA never went away. Their music remained popular, selling steadily, and formed the background for the 1994 Australian Cult Classic Muriel's Wedding - ABBA has always been especially huge in the Land Down Under. More directly, Benny and Björn collaborated three times in the realm of musical theater. First with lyricist Tim Rice on Chess, and later in the creation of Mamma Mia!, a stage musical based around ABBA songs. The musical, opening first in 1999 in London and in New York in 2001 has proved enormously popular with global audiences. In 2008 a movie version was released staring Meryl Streep, Pierce Brosnan and Amanda Seyfried (who, at 22, was born well after the group dissolved). That film was such a smash hit that it made $100+ million before it opened in North America, and later spawned an original theatrical sequel, Mamma Mia! Here We Go Again, which released in 2018. Their third stage musical is called Kristina from Duvemåla (or just Kristina for short) and is based on the literary epic by Vilhelm Moberg about a group of people who emigrate from Sweden to America in the mid-19th century. The musical was a massive success in Sweden and remains one of the most popular musicals of all time there. It's been translated into English but has not been performed other than in concert. Many fans of the original Swedish version are highly critical of the English translation, citing a huge decrease in the quality of the lyrics, which might have played a role in the show not being brought properly to an English-speaking stage.

Other created and related spin-off works

This song is about a woman who decides to become a gold digger to remedy her financial problems.

This song is about a woman who decides to become a gold digger to remedy her financial problems.