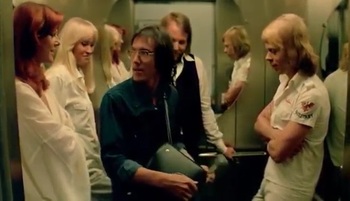 ABBA: The Movie is a 1977 film about the Swedish pop group ABBA, directed by Lasse Hallström, who directed most of the group's videos.

It is half a documentary about the band's Australian tour, and half a fictional storyline that concerns the adventures of Ashley Wallace (Robert Hughes), a naïve radio DJ who is assigned by his station's boss to get an in-depth interview with the group. Ashley, who has never done an interview before, is forced to follow the group all over Australia's main cities.

The film's release coincided with the release of ABBA: The Album, the group's fifth studio album, which basically serves as the film's official soundtrack album, with the film featuring many songs from that album as well as many of their earlier hits.note With the exception of the "Get on the Carousel", unavailable anywhere else outside the film.

So I say thank you for the music
For giving it to me...