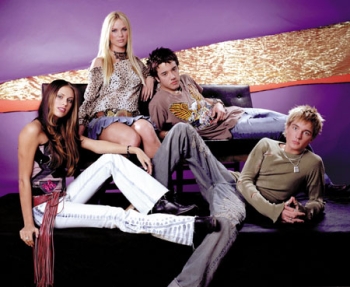 Formed in 1998 by Niklas Berg, the Swedish pop group A-Teens (sometimes stylized as A*Teens) began as an ABBA cover group for the the Teen Pop Revival of the Turn of the Millennium. Like ABBA, the band consisted of two males, Amit and Dhani, and two females, Marie and Sara.

The cover group gimmick only lasted one album, The ABBA Generation. Their follow-up, Teen Spirit, saw the group doing exclusively original material and scored the group's biggest hit, "Bouncing Off The Ceiling (Upside Down)." The group released one more album, Pop 'Till You Drop, in 2002 before disbanding in 2004.

Tropes based on their work: