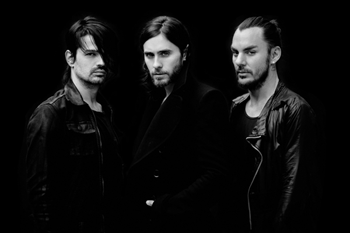 Tomo Miličević, Jared and Shannon Leto
"To the right, to the left
We will fight to the death
To the edge of the earth
It's a brave new world from the last to the first"
— "This Is War"
Advertisement:

Thirty Seconds to Mars are an American rock band founded in 1998 in Los Angeles by brothers Jared and Shannon Leto as a family project, but later expanded to a full studio and touring unit.

Their first Self-Titled Album in 2002, influenced by bands such as tool, was a moderate success, somewhat tempered by the band trying to gain respect on their own merits as opposed to coasting on Jared Leto's success as an actor (in fact, early on, the band wouldn't play shows that heavily promoted it based on Jared's acting career) and touring with bands that didn't exactly fit the music they played.

The band finally hit the mainstream with their second release, A Beautiful Lie, in 2005. The album not only started their habit of reinventing their sound with each new release, it also started the trend of presenting some very high effort concept videos to go with the singles, especially the ridiculously successful "The Kill". note  As of "The Kill", most Mars videos are directed by Jared under the alias of Bartholomew Cubbins (and Angakok Panipaq for the "A Beautiful Lie" video). Other people have directed Mars videos (most commonly Paul Fedor), but the band maintains creative input.

And then in 2008, their label sued them for $30 million dollars. Virgin Records claimed that Mars failed to deliver 3 albums in a certain span of time under contract. Mars decided to defend themselves, leading to the main conflict that lead to their eventual third release, This is War, and Artifact, a full length documentary and critique of the music industry as a whole.

They toured in support in support of This is War following its release in late 2009...with 309 shows in 2 years. This eventually lead them to gain the Guinness World Record for "Longest Concert Tour by a Rock Band". They weren't even doing it intentionally. That being said, their live shows have gained a reputation for being energetic. And if that wasn't enough, in 2013, they promoted the announcement of their new album, Love, Lust, Faith and Dreams, by sending the first single "Up in the Air" to the International Space Station.

Their fanbase, the Echelon, are known for their devotedness, creative endeavors, and support for charitable causes

including Habitat for Humanity

. They even have their own convention

, a high quality social streaming service that hosts PPV events, including their 300th show touring for This is War (Mars 300), two preview events for Love, Lust, Faith and Dreams (The Mars Lab and The Mars Lab 2), a commemorative event for the 10th anniversary of their self titled album's debut (MARSX), the highly demanded Cooking with Tomo, their 2013 show at the Hollywood Bowl, and after a really long time, the release of their documentary Artifact. When Mars went on a co-headlining US tour

with Linkin Park, bringing along AFI for the ride, they streamed the Hollywood Bowl date on VyRT

"Hey Matt, how much time do we have to add tropes?"