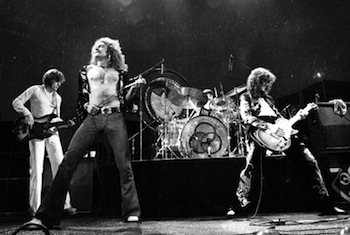 Led Zeppelin at their peak. From left to right: John Paul Jones, Robert Plant, John Bonham, and Jimmy Page.
"Oh, pilot of the storm who leaves no trace
Like thoughts inside a dream
Who hid the path that led me to that place
Of yellow desert screen
My Shangri-La beneath the summer moon
I will return again
Sure as the dust that floats high in June
When movin' through Kashmir"
— "Kashmir"
"Thank you for making us the world's number one band."
— Melody Maker advertisement for the release of Led Zeppelin III
Advertisement:

The one, the only, the hammer of the Gods.

Long story short: Led Zeppelin formed in 1968 after The Yardbirds disintegrated and Jimmy Page recruited three other lads to satisfy contractual obligations for The Yardbirds, naming themselves The New Yardbirds. The band was originally to be a Supergroup consisting of Page, Jeff Beck, Nicky Hopkins on piano, Keith Moon and John Entwistle. They actually recorded one song (but with John Paul Jones on bass instead, because Entwistle couldn't make the session) called "Beck's Bolero", which made its way onto The Jeff Beck Group's Truth. The group never amounted to more, as Entwistle and Moon allegedly said it would go over "like a lead balloon". After Chris Dreja threatened legal action, Page — remembering Moon and Entwistle's quote — changed the name from The New Yardbirds to Led Zeppelin. They went on to release many albums, tour heavily, become one of the most successful and famous bands in Rock & Roll, be a significant influence on Heavy Metal, and generally rock so hard as to blow people's minds and inspire them to form bands of their own. They broke up in 1980 after drummer John Bonham asphyxiated on vomit after a day of binge alcoholism. They were famously trashed at first by critics in The '70s but gained a huge fanbase, and those critics (particularly Rolling Stone magazine) have since reversed themselves and realized that Led Zeppelin is awesome after all. The band is as emblematic of '70s rock as The Beatles were of '60s rock.

The band have written their fair share of famous classic hard rock songs that sometimes get extremely overplayed on AOR/"classic rock" radio for new generations to get annoyed, such as: "Dazed and Confused

", "Kashmir", and "Trampled Under Foot". Don't peg them as simple noise-merchants, though, because their discography's really varied and sometimes experimental, ranging from Blues Rock and acoustic Folk Rock to Eastern-influenced material, Funk, Progressive Rock and weirder. They're widely respected for their superior musical abilities, eclectic tastes, and legendary concerts and well-known for their infamous exploits (such as the "shark episode"), among others. Also, pretty much any rock and metal band formed since owes them at least a bit, whether they admit to it or not.

But, as with every mega-successful and influential band, there are downsides. Negative marks on their record include Plant's habit of lifting lyrics from old blues songs without credit (which led to the occasional lawsuit), their occasionally embarrassing lyrics (they referenced The Lord of the Rings about thirty years before the movies made it cool to do thatnote if you were a hippie and/or a college student at the time, their use of Tolkien was extremely cool, while the Professor himself didn't even notice they were doing it), the band inevitably allowing success to go to their heads and descending into overblown excess post-1975, and the infamous 1976 Rockumentary film The Song Remains the Same, commonly cited as one of the worst concert films ever, thanks to the sub-par performances and self-indulgent fantasy sequences. Also to be mentioned is their continued refusal to allow their songs into rhythm games such as Guitar Hero and Rock Band.