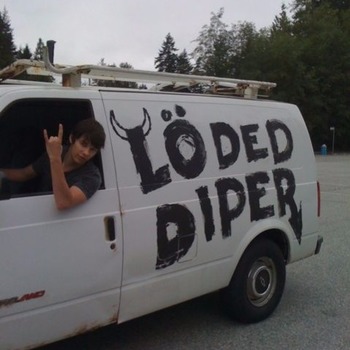 "If you told Rodrick how 'Loaded Diaper' is really spelled, it would be news to him."
"...take a really cool word but then spell it all wrong. You know, like... 'Lazor', or 'Bigg Nife', or something like 'Taranchula', or maybe like 'Limozeen'..."
— Strong Bad, Strong Bad Email #16 "band names"
Advertisement:

Sometimes musicians like to make their band's name oddly spelled for one main reason: It's cool. note  Also, deliberate misspellings can usually be trademarked whereas extant words and phrases cannot.

A combination of Xtreme Kool Letterz, often Funetik Aksent and My Nayme Is, and bonus points if they have a Heävy Mëtal Ümlaut. This type of band name is usually associated with music movements like Hair Metal and the New Wave of British Heavy Metal, but can be used with any type of rock music (and probably any kind of music at all).

Subtrope of Xtreme Kool Letterz and My Nayme Is when applied to music.