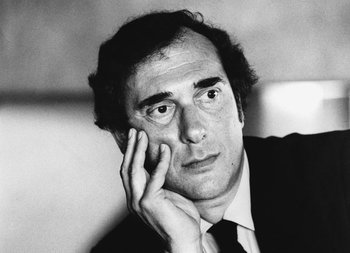 Harold Pinter CBE is really known for one thing above all others.

The pause. He put it in his first playscript and it became a very big thing, though he was never quite sure why.

His plays tend to involve very normal, slice of life stories of characters acting slightly absurdly, often including very dysfunctional families/relationships. Often his plays occur in real time - 70 minutes on stage is 70 minutes in the script. The realism that he brought to the stage was jarring and unnerving to an audience, and in a way could be related to the sort of thing that Chekhov had done in Russia decades before. When someone says 'please pass the salt' they inevitably mean 'our marriage is a sham and I hate you'.

He writes dialogue characterised by frequent repetition and questioning.
Does he?
He does.
Oh yes. I guess he does.
You guess?
Oh yes. Metal Gear?!
...and so on.

He says he drew inspiration from Samuel Beckett. In fact, he wrote a lengthy defence of Beckett's Waiting For Godot without even having seen it. Both writers, among others, are considered defining playwrights of the Theatre of the Absurd. Pinter's repetitious and nearly Seinfeldian dialogue, as well as the simultaneously menacing and funny tone of his plays are common features of absurdist theatre. His plays tend to function as both literal and metaphor open to interpretation and are rarely overt in theme.

Pinter was an actor and a writer and in his later years a highly political poet and activist but it is for his plays of the late fifties and sixties that he will most be remembered. This particular style of theatre is known as 'Pinteresque', a word he detested and claimed not to understand.

Pinter won the Nobel Prize in Literature in 2005.

He also wrote screenplays, most famously three film collaborations with an American exile Joseph Losey, including The Servant, Accident and an adaptation of The Go-Between. In addition to this, he wrote The French Lieutenant's Woman and The Handmaid's Tale, and occasionally acted (he appears in film versions of Wit and Mansfield Park).

Tropes common to Pinter's work include: