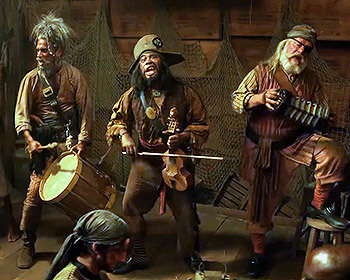 Pirates can be a jolly bunch, when they're not plundering and pillaging. It's fairly common in fiction for pirates to sing songs while on their ship, in a tavern, or someplace else, often with lyrics about how they enjoy being swashbucklers. The song will usually be sung in a characteristic pirate accent, and are most likely played on an accordion.

These songs usually take the form of a sea shanty,

a type of song that was originally sung by laborers on large merchant ships.

Viking songs count too. After all, both pirates and vikings are seafaring marauders.

Often overlaps with Accordion to Most Sailors, "I Am" Song, Job Song, and Villain Song. Often featured in Pirate Episodes. See Ghost Song for more amoral beings singing about what they do best. (Considering the prevalence of Ghost Pirates in fiction, there may be overlap between this trope and Ghost Song as well, somewhere...)

Not to be confused with pirated music.