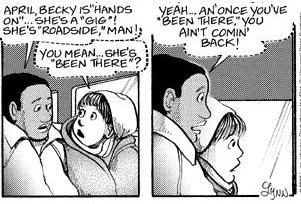 You're talking about screwing, right? Because it actually would've been a lot easier to have just said that.
"I apprehended the accused and advised him of his rights. He replied, 'Why don't you ram it up your pimhole, you fusking clothprunker.'"
— A Bit of Fry and Laurie

The characters are talking about an embarrassing issue by using a rubber-ducking euphemism that the scriptwriters just made up.

Many Science Fiction shows make up such curse words so as not to offend Standards and Practices, probably because these expressions can pass as Future Slang.

Can sometimes even be the result of censorship: see the Bowdlerization: Film subpage.

Rather than being used to talk about an embarrassing issue, may be used to discuss something of questionable legality without attracting attention. If used to talk about one's personal body parts, the trope is I Call Him "Mr. Happy".

Sister trope to Sexual Euphemism. Contrast Unusual Dysphemism. Compare to Smurfing, Never Say "Die", Foreign Cuss Word, Pardon My Klingon, Gosh Dang It to Heck!, Curse of the Ancients, Hold Your Hippogriffs, Getting Crap Past the Radar and Informed Obscenity.

A Date with Rosie Palms attracts a lot of them. See also Lampshaded Double Entendre. If a character interprets an innocent phrase as one of these, you have Is That What They're Calling It Now?. Intercourse with You songs and, of course, bawdy ones sometimes have a lot of these.

Laverne and Shirley use the euphemisms "vodeo dodo" to refer to sex and "vodeo" by itself to refer to something unknown.

Laverne and Shirley use the euphemisms "vodeo dodo" to refer to sex and "vodeo" by itself to refer to something unknown.