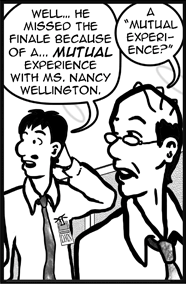 This is when sexual intercourse and other sexual activities are referred to by code words. This type of euphemism is usually used by adults, especially when near children or in a work targeting children, though they may also use sexual euphemisms when discussing the topic with a friend or family member. Many of these euphemisms come from common language and, in certain cases, can be totally innocent. As such, this may overlap with Innocent Innuendo if it turns out the "euphemism" was literal.

These euphemisms can be part of a character's humor or their schtick, and depending on the specific euphemism, it could establish their character as a lewd pervert, someone who's comfortable with their sexuality, or someone who has enough wit to talk about these things in polite society. In some cases, pink is used to highlight these elements as a visual aid or to highlight it.

Some common euphemisms for sex include: one thing, this and that, making love, the nasty, doing the do, getting lucky, getting laid, doing the horizontal tango, dancing, woohooing, making whoopee, and literally hundreds more

. Some common euphemisms for other sexual activities include: choking the chicken, crying bald man, beating the meat, strangling the cyclops, menage a moi, and countless others.

This is a supertrope to Get Thee to a Nunnery, which is when the sexual euphemism is no longer understood as such, though it used to be. This may overlap with Intercourse with You, which is a song about sex with or without euphemisms; Getting Crap Past the Radar, when euphemisms are used to include otherwise inappropriate talk; and Double Entendre, when an innocent phrase has a double meaning related to sex. If used as names, they are Euphemistic Names. Also see The Body Parts That Must Not Be Named, when someone uses euphemisms for the sex organs. This is a sister trope to Unusual Euphemism, which is when a character makes up a euphemism for sex because they're made uncomfortable by the subject. Contrast Is That What They're Calling It Now? for when something is not intended as a euphemism for sex but a character interprets it as one, which overlaps when a term turns into this. Accidental Innuendo is when the author didn't intend it either. See also Innocent Innuendo and Heh Heh, You Said "X". See also Gay Euphemism which is about avoiding direct usage of homosexuality-related terms.

Victoria and Brycycle flirt in a manner so unsubtle it hurts.

Alternative Title(s): This And That

Victoria and Brycycle flirt in a manner so unsubtle it hurts.