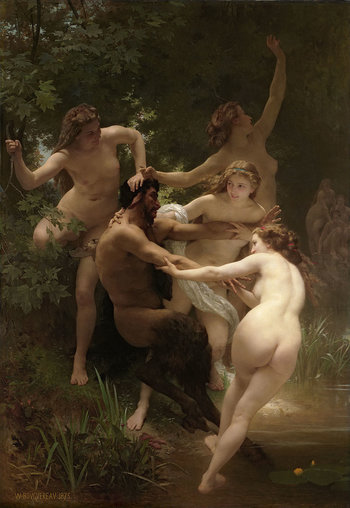 Nymphs and Satyr (French: Nymphes et un satyre) is a painting, oil on canvas, created by artist William-Adolphe Bouguereau in 1873.

Nymphs and Satyr was exhibited in Paris at the 1873 Salon, which opened on 5 May, a year before the Impressionists mounted their first exhibition. One critic called it "the greatest painting of our generation". Purchased for 35,000 francs by the American art collector and speculator John Wolfe on 26 June, 1873, it was displayed in his mansion for many years alongside other high-style French academic paintings. It was sold at auction in 1888, after which the painting was displayed in the bar of the Hoffman House Hotel, New York City until 1901, when it was bought and stored in a warehouse, the buyer hoping to keep its 'offensive' content from the public.

Robert Sterling Clark discovered the piece in storage and acquired it in 1942. The piece is currently on display at the Clark Art Institute located in Williamstown, Massachusetts.

Nymphs and Satyr provides examples of: