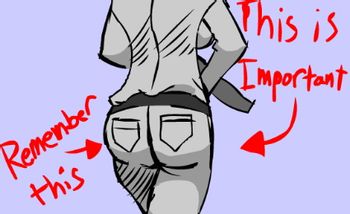 The Male Gaze is a form of Gaze that arises from the assumption that the audience is mostly male, which in turn means female fanservice will appear in some form to appeal to or appease said male audience.

The usual result of Male Gaze is the way a (usually male) director/cameraman's interest in women shapes his shots, leading to a focus on breasts, legs, buttocks, and other jiggly bits even when the film isn't necessarily supposed to be a feast for eyes of their admirers (though most of the time this can indeed be intentional). For example, a sex scene between a man and a woman may show more of her body than it does of his, or focus more on her reactions than his (see Right Through His Pants). Alternatively, it could appear in shows that aren't overtly sexual - for example, scenes of bikini-clad female characters talking that emphasize their bodies rather than showing just their heads. This trope can be used as a legitimate cinematic effect, especially when combined with Point of View. (At that point it may become Eating the Eye Candy, though not necessarily.)

The term also applies in other media, such as video games and comic books. During the Dark Age, comic books were (and often still are) perfect examples of the male gaze, with scenes being framed to show off a female character's curves over everything else.

Male Gaze does sometimes focus on male attributes, focusing on big pumping biceps and perfect abs, but, crucially, in a way that is sexless and aspirational. The presumed male audience is intended to relate to the character being objectified in this way and wish they had that body themselves, rather than desire the character.

The Distaff Counterpart of the Male Gaze is the Female Gaze - where the same rules as above apply except the focus is on more traditionally masculine qualities in a character.

If the woman in question is aware of the Fourth Wall, she'll likely snap "Ahem, eyes are up here!" at the camera/artist/character.