Curves in All the Right Places 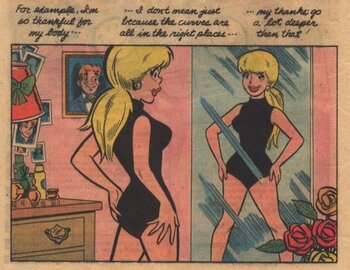 Betty has curves in all the right places, even if she does say so herself
She had curves in places other women don’t even have places.
— Cybill Shepherd, referring to Marilyn Monroe
Advertisement:

A Stock Phrase for narrators describing an attractive female character, and for Fan Fic writers trying to make a female character inexplicably more attractive than she is in canon. It probably describes an hourglass figure — that is to say, large breasts, round hips, and a small waist connecting the two — but exactly what it means is kind of vague and highly subjective, since readers' ideas of what "all the right places" are, and how much they should curve, will vary.