Crashing Through the Harem 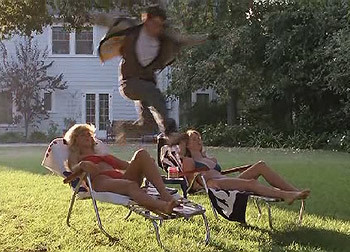 For whatever reason, our young male protagonist is in the middle of a chase scene or bar brawl and crashes straight into a room full of beautiful young women. Depending on the setting, this could be an Arabian Nights-style harem, a bordello, or a girls' locker room, but it will be a private place containing several young women, usually in some state of undress. Expect there to be lots of silk curtains and maybe a bath or shower. They may act offended (going so far as to go after the young male protagonist for intruding or just scream at him and throw stuff) or they may giggle and even flirt with the hero... until their dour chaperone shoves him back into the fray. Sometimes, the young male protagonist may hide out in the harem, bordello, or girls' locker/shower room in order to escape whoever's chasing him, often dressed in drag, posing as a chaperone/eunuch/locker room guard, or disappearing into a locker, curtained-off room, or in a vent.

May overlap with Distracted by the Sexy, Accidental Pervert or both. Can lead to a Crash-Into Hello. For when it's only one girl in a state of undress, see Naked First Impression. May also overlap with Naked People Are Funny and Moment Killer.