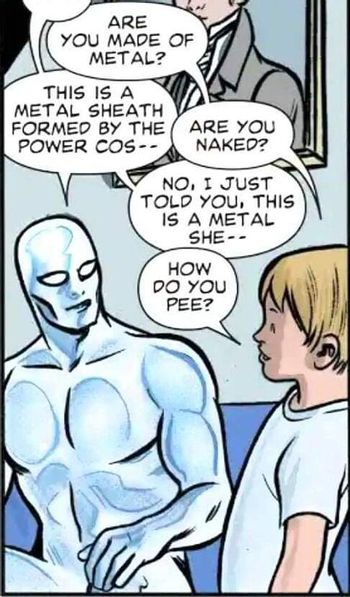 "By the time you figure out what was wrong with that, it won't matter anymore!"
—Sauron, One Ring to Rule Them All Special Edition
Advertisement:

Half an hour after the show is over, a random viewer is staring into their refrigerator, vaguely bemused by the fact that their six-pack of beer has somehow become a two-pack of beer. Rather than work out how this might have happened, it occurs to them to wonder how in the hell Sydney Bristow went from Hungary to Melbourne, Australia, then to LA, all within 24 hours. Or maybe it occurs to them that they've never met anyone who actually named their dog Fido. It didn't bother them during the show. It wasn't until they discovered they were running short of beer that it became an issue.

Fridge Logic has been the writer's-room term for these little Internal Consistency issues for a good while, as in "Don't sweat the Fridge Logic, we've got bigger fish to fry. We've only got 20 minutes left to work in three costume changes, a foreign language, and a weird wig." It refers to some illogical or implausible plot point that the audience doesn't realize during the show, but only long afterwards. This naming is highly subjective, since not every person follows the same train of thought. Some people will never even realise there was a problem, while others will call it a Plot Hole, since they already noticed the problem during the show.

The concept was first suggested by Alfred Hitchcock. When asked about the scene in Vertigo when Madeleine mysteriously and impossibly disappears from the hotel Scottie saw her in, he responded by calling it an "icebox scene": a scene that "hits you after you've gone home and start pulling cold chicken out of the icebox."

It is also known under a variety of other names:

Ronald D. Moore talks about Fridge Logic extensively on the commentary to Battlestar Galactica (2003) episode (2.02) "Valley of Darkness," likening it to the type of logic used to figure out whether the light in the fridge stays on when the door is closed.

Stories with a Tomato Surprise or Through the Eyes of Madness may count on this phenomenon to prevent you from questioning oddities in what appears to be happening. By the time the Fridge Logic would have hit the audience, they've explained what was really going on, and those problems are explained to be clues that something was up.

See also Fridge Brilliance for when there's actually a really good explanation when you think about it, and Fridge Horror when something is incredibly nightmarish when you think about it. Sometimes Fridge Logic (and/or a heaping helping of Values Dissonance) can turn an otherwise happy ending into a bittersweet or outright Downer Ending (such as by pointing out the possibility of an Inferred Holocaust); for this, see Esoteric Happy Ending. This is also related to the MST3K Mantra, which allows you to just go along for the ride and not sweat the details. When fans notice these during the show, it's a plain old Plot Hole. Not related to Stuffed into the Fridge. Also not to be confused with Bridge Logic, the un-tasty Oven Logic, Frege logic

or Bathroom Logic. If the characters themselves fail to ask questions about a given plot development or device, then it's because Apathy Killed the Cat. Fridge Logic is the antithesis of Tropes Hidden From The Audience — usually, those remain "hidden" until the audience really has time to think about them.

By the way, we have whole sections of This Very Wiki dedicated to these issues. This article just defines a term. It neither needs nor wants any examples. To discuss Fridge Logic issues that bug you — which can be a lot of fun — see Headscratchers, or any of our fine Forums

, or the "Fridge" tab on a work's page. If what occurred to you later was a wild theory, see Wild Mass Guessing.