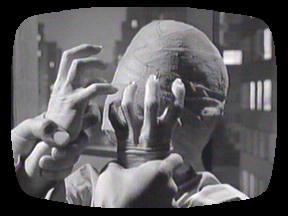 Guess what she looks like under those bandages. note She's a beautiful human, but everyone else has pig snouts.

The resolution of a plot (usually, but not always, for a Speculative Fiction story) with the sudden revelation of some important detail which has been deliberately hidden from the viewer. Unlike most twists, however, this detail is (usually) known to all, or most, characters and is often something that they would consider an obvious and mundane detail. Often, had this detail been made known at the beginning of the story, much of the dramatic tension would have been missing.

Withholding important details from the audience is not, in itself, anything special: think of all the murder mysteries that don't immediately reveal the very important detail of who did the murder, or all the surprising twists and turns where characters learn shocking truths about themselves and their world. The Tomato Surprise, however, is only a surprise due to the narration withholding important information that the reader might reasonably have expected to have been told up-front, like "the story is not, as you probably assumed, set on Earth" or "the protagonist is not, as you probably assumed, a human being".

The Reveal in a Tomato Surprise tends to be different from other types of twist. Since it is revealing to the audience something the characters already know, it is not tied to any dramatic development in the story, and simply consists of the camera showing us something that was previously obscured, or the narrator "casually" naming a character or setting that was previously not identified. The trope is a bit harder to pull off in visual media since Genre Savvy viewers will have their suspicions the more they notice that characters' faces are being deliberately hidden.

If done well, a Tomato Surprise can make for a stunning ending with a powerful impact. Unfortunately, if done poorly, it will almost always come off as a cheat or an Ass Pull.

While this trope is often used for dramatic effect, it can also be used — especially in Science Fiction — to illustrate a moral or ethical situation in such a way as to invoke a different set of prejudices. Once the viewer has fully understood the dilemma as it applies in their assumed environment, the author reveals that the assumption is false and that the circumstances are different, leaving the viewer to reconcile new conclusions with old prejudices. For example, a story might describe the protagonist's difficulties in society before finally revealing that the character belongs to a marginalised ethnic minority, thus hopefully forcing a bigot who sympathized with the character to reconsider their position. Another popular tactic in this vein, focused on gender rather than ethnicity, is to reveal that Samus Is a Girl after telling a story of seemingly masculine exploits from Samus's own perspective — as was the case with that trope's namer Samus Aran in the first Metroid game.

The trope name comes from a set of writer's guidelines distributed circa 1980 by Asimov's magazine, written by its then-editor, George Scithers. The guidelines named the trope and gave as one of the examples hiding the fact that the hero is, in fact, a tomato.

This trope can be considered a form of Unreliable Narrator, though generally, the narration doesn't actually lie, merely strategically omits key details.

See Earth All Along, The All-Concealing "I", Narrator All Along, and The Ending Changes Everything. Related to Karmic Twist Ending and Cruel Twist Ending. The opposite of this trope is Dramatic Irony when the audience knows something that the characters don't.

This is a Plot Twist trope, and as such will contain major spoilers. From the viewer's point of view, of course.

Xigbar was Luxu the whole time!

Xigbar was Luxu the whole time!