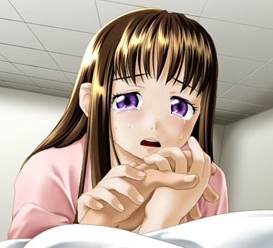 You will be doing this by the end.
Advertisement:

Utsuge is the Japanese portmanteau for "depressing/melancholy game". As the name implies, these games' goal is to make the player cry. Most of them are of the Visual Novel variety, in which the player is guided through an increasingly (melo)dramatic story.

Games of this type contain lots of typical tear-jerking material, with death, mental problems, loneliness and rejection as central themes. A lot of them contain at least one girl with a serious disease, who has to be helped by the player. Downer Endings are very common when the player fails to achieve this goal.

Utsuge are often populated by Bishoujo-style characters and aimed squarely at a Seinen (young male) audience. By far the most of them take the form of Dating Sims, where the dramatic material is used to give the on-screen girls more depth and character. In some of those games, the drama actually becomes much more prevalent, overtaking the premise of simply trying to date girls.

Another common feature, or lack thereof, is the absence of any real villain. The sorrow instead comes from intangible forces like disease- which, in a way, makes the game sadder because there is no Big Bad, no easy target to blame for the tragedy, as if to say “sometimes bad things just happen”.

A similar term with different connotations is "nakige" ("crying game/sob story game"), which usually refers to games with depressing stories that get resolved in the end.

Contrast Iyashikei, which is more or less this genre's diametric opposite in Japanese media.

And now you know all there is to know about The Crying Game.