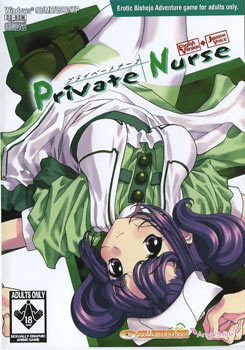 Since childhood, Hiroki has suffered from a malady that leaves him weak and tired. Ayano, his neighbor and childhood friend, has always taken care of him as best she can. Even with her care and attention, he can't help but fall into a depression that he will never get better, since it seems most days all he can manage to do is get to school and back home again. Then one day there is a knock at his door. When he answers, a pretty young girl wearing a nurse's outfit gently says, "Hi, I'm Maria. I am your private nurse." Meanwhile, the new school nurse, Mio, also takes on the task of curing Hiroki. Ayano must overcome her jealousy that these two women have intruded on her relationship with Hiroki while at the same time hoping that he can be cured. Mio wants to cure him to prove she can be a better nurse than her school career implied. Maria is confident that she can cure Hiroki, but she can only stay with him for 30 days, and may be more than what she seems.

Private Nurse is a Visual Novel-style Utsuge eroge from Angel Smile. While it does have some amount of sex in it, it is entirely incidental to how the story unfolds. And the story is nothing short of fantastic. In its most basic form, it's a love story, but it calls out to several other styles as well. There is a small amount of the fantastic implied, but overall it is a story about four ordinary people. Even though the story does play to a lot of tropes, as you can see in the list, it also has a tendency to twist, subvert or invert them at some point, which can keep the story from feeling too cliched, and more realistic. Depending on the decisions you make during the game, the good endings vary from a positive to a nearly tragic Bittersweet Ending. Expect many Tear Jerker moments in between as the three women do their best to try to cure both Hiroki's body and spirit so he can look forward to having a normal life.