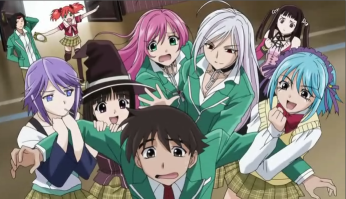 Man, it must be so hard for you chick magnets.
"Well, I'm running down the road trying to loosen my load,
I've got seven women on my mind.
Four that wanna own me, two who wanna stone me,
One says she's a friend of mine."
— Eagles, "Take It Easy"
Advertisement:

Not to be confused with Harem Genre, a genre of Japanese media that sometimes heavily relies on this trope.

This trope involves a common reaction from the man when a Harem plot begins and women start fighting for his attention. He might either think like a Celibate Hero, that the gratuitous quantity of boobs he is forced to see every day are just a bother (Comically Missing the Point that he is in an enviable situation), or see them as an obstacle between him and the girl he truly likes, or he may just find them annoying for one reason or another.

The more likely reason plot-wise is the fact that the male lead cannot reciprocate all the girls' feelings without seeming to the audience to be cruel, manipulative, and misleading to the girls. So the far easier solution is to make him oblivious to their affection or Cursed with Awesome.

Even if he does like one or more of the girls, the man won't or can't admit it. Besides, until the point comes where one of the girls is in danger, the man would rather have his nice quiet life back. The trope may or may not involve Innocent Cohabitation.

While this is, as might be gathered, usually a male trope, gender-reversed versions have recently begun to appear.

The most common and immediate consequences of said harem is the ever-hilarious (if incredibly painful to watch) Lover Tug-of-War.

When criticism is raised against a harem show it's usually due to an overdose of this trope; unfortunately, when played straight, this trope is almost always overdosed. While it's often criticized as blatant Wish-Fulfillment, most criticism regards the tendency to portray the female cast very negatively, often giving them little personality, or having their characters largely defined by their dependency on the male protagonist and/or irrational tendencies towards violence.

Contrast Harem Seeker, where the "unwanted" part is left out. Also compare Sexy Man, Instant Harem, which may or may not be wanted, but which usually involves more superficial characters.

Resolutions to such a situation are varied.