Film / There's Something About Mary 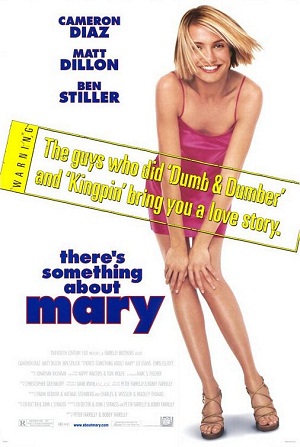 "His friends would stay stop whining, they've had enough of that
His friends would say stop pining, there's other girls to look at
They tried to set him up with Tiffany and Indigo...
But there's something about Mary that they don't know..."
— Jonathan Richman
Advertisement:

There's Something About Mary is a 1998 romantic comedy film, directed by the Farrelly Brothers and starring Cameron Diaz, Matt Dillon and Ben Stiller.

The story begins in 1985, as awkward and shy high-schooler Ted (Stiller) lands a Prom date with his dream girl Mary (Diaz), only to have it cut short by a painfully humiliating zipper accident.

Thirteen years later, Ted is still in love — maybe even obsessed — with her. On the advice of his best friend Dom (Chris Elliott), he hires sleazy private detective Pat Healy (Dillon) to track her down. Healy finds that she is an orthopedic surgeon living in Miami but falls in love with the irresistible Mary as well. As the film progresses, Ted and Pat compete for her affections as the roster of other suitors rapidly snowballs.

Among the supporting players are Markie Post as Mary's mother, Keith David as her stepdad, W. Earl Brown as her mentally-challenged brother, Jeffrey Tambor as Healy's even sleazier friend, and a young Sarah Silverman as one of Mary's friends in Florida.