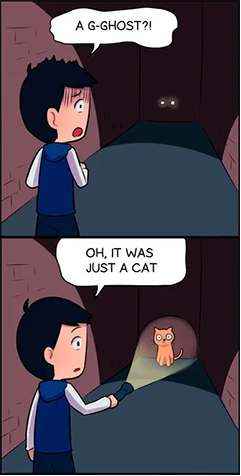 "Where did it come from? There's nothing here but ceiling! I love how these animals just fall out of nowhere, right into your hands. What do they do, just hang up there by their claws and wait for people to pass by?"
— Mike, There's Nothing Out There
Advertisement:

A Cat Scare is a strong buildup of high tension, followed by a fright from something harmless (say, a startled cat) to release that tension.

For example, a heroine may be tiptoeing down a dark hallway to escape the serial killer who cut the power in her house when a door in the hallway starts to slowly creak open ... she pauses, a look of genuine fear in her face as the door slowly edges open and out leaps ... a cat! Phew, not what we were expecting. It was only a cat...

Note that although the Cat Scare is harmless by itself, it is very often used to effectively double-subvert a Jump Scare. In this scenario, the Cat Scare is introduced to soften up the audience for a real scare to follow shortly — so in the above example, although the heroine (and the audience) is relieved that it was "just a cat", the camera may subsequently cut back to her and reveal how the serial killer is approaching from behind while she's breathing that sigh of relief. Similarly, another variant is that some Fridge Logic associated with the cat's presence clues the character in to the real horror to come. ("Hang on, if all the doors were shut, how'd that cat get in...?")

As Roger Ebert points out in his book of Hollywood clichés, the cat often enters shot hissing and raving, airborne at chest height, as if it has been thrown into shot by a technician. (Hence another common name for this phenomenon: "the spring-loaded cat;" in particular because the feline in question often appears to be deployed as soon as the door/chest/other suitable object is opened).

Moving toward Discredited Trope territory, but still shows up done straight from time to time.

Can overlap with That Poor Cat. Sister trope of Self-Offense.

Not to be confused with Convenient Decoy Cat, where the cat diverts the attention of the bad guys from a hiding hero.

While sometimes the "cat" is logically hidden, sometimes it's Behind the Black — a place where the person should see it but is off-camera.

Although the use of an actual cat for a Cat Scare is common enough to have named the trope, the general technique of building up tension and then startling the audience with something that turns out to be harmless is also known as a "Lewton Bus". This name comes from producer Val Lewton, who popularized the technique with a scene in his 1942 movie Cat People: the heroine is being stalked by a hostile were-panther, but the cat-like hissing noise that startles the heroine and audience turns out to have come from a bus's air brakes.

The mass equivalent is Bat Scare, in which a whole flock of startled creatures provides the scare. Also see Hope Spot (a false sense of tidy resolution before heading into an ugly one instead), Hey, Wait! (a false sense of discovery of subterfuge) and Your Princess Is in Another Castle! (a false sense of resolution quite early in a story). When you want a fake scare without launching a feline, you deploy the Scare Chord. Contrast Imminent Danger Clue, where instead of mistaking something harmless for something dangerous, the character temporarily dismisses or fails to notice a sign of danger because it seems completely ordinary. When it happens at the end of a story for comedy, see Shock-and-Switch Ending.