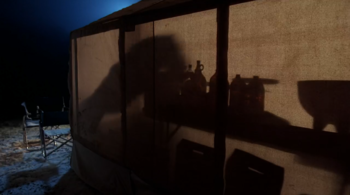 If you believe this beast is the main threat of this episode, think again.
Written by John Shiban
Directed by Kim Manners
"What is it that the Secona believe? That the jaguar spirit will devour anybody that desecrates the burial place of a holy woman."
— Fox Mulder
Advertisement:

Bodies start piling up after archaeologists remove an ancient burial urn from a site in the Ecuadorian highlands.

Advertisement:
"The true curse that struck the museum was the failure to understand that there are powers that should not be disturbed... that some things are better left buried."