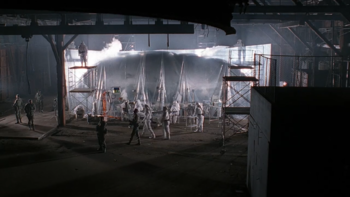 "I think I'm entitled to a few more answers, don't you think?"
Written by Chris Carter, Howard Gordon & Frank Spotnitz
Directed by David Nutter
Matheson: Several weeks ago in Knoxville, Tennessee, four Japanese nationals were murdered. All prominent doctors apparently engaged in a highly classified project.
Mulder: What kind of project? The autopsy of an extraterrestrial lifeform, was that part of it?
Advertisement:

Mulder's investigation of an alien autopsy video leads to a secret project with connections to unethical experiments done by Japanese scientists during World War II. Meanwhile, Scully learns more about what happened during her alien abduction.

"Mulder, don't get on the train. Mulder. Mulder!"