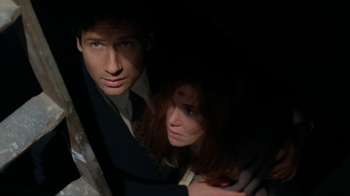 "Why else would you come back here if not for Amy? You’re sharing her pain."
Written by Charles Grant Craig
Directed by Kim Manners
"You’re becoming an empath yourself, Mulder. You are so sympathetic to Lucy as a victim like your sister, that you can’t see her as a person who’s capable of committing this crime."
— Dana Scully
Advertisement:

When a young teenage girl is kidnapped from her home, a fast food worker (Tracey Ellis) miles away collapses on the job, apparently experiencing exactly what the child is feeling. When Mulder learns that the woman was kidnapped and held hostage for years as a child, he begins to believe that she may be the key to help find the missing girl.

"Finally, the only way she could outrun Carl Wade."