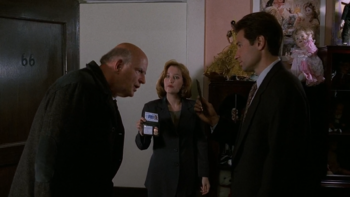 "You're not under suspicion... but I do harbor a suspicion that you can see things about this crime... things that we can't see."
Written by Darin Morgan
Directed by David Nutter
"Mister Bruckman, I believe in your ability but not your attitude. I can't stand by and watch people die without doing everything in my, albeit unsupernatural, power to interfere with that fate."
— Fox Mulder
Advertisement:

Mulder and Scully investigate a serial killer who targets psychics and fortune tellers. They meet the Stupendous Yappi, a celebrity psychic who even Mulder doesn't believe is for real, and Clyde Bruckman (Peter Boyle), a world-weary insurance salesman who might have genuine precognitive powers.