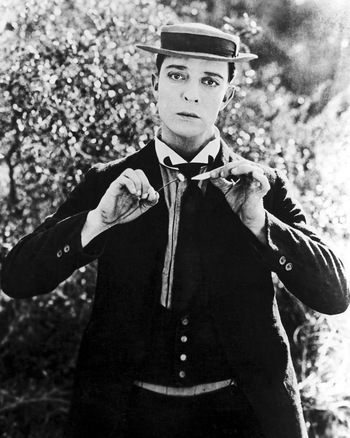 "He was by his whole style and nature so much the most deeply 'silent' of the silent comedians that even a smile was as deafeningly out of key as a yell... No other comedian could do as much with the dead-pan. He used this great, sad, motionless face to suggest various related things; a one track mind near the track’s end of pure insanity; mulish imperturbability under the wildest of circumstances; how dead a human being can get and still be alive; an awe-inspiring sort of patience and power to endure, proper to granite but uncanny in flesh and blood."
— James Agee, LIFE magazine (1949)
Advertisement:

Joseph Frank "Buster" Keaton (October 4, 1895 – February 1, 1966) was an American comedian, actor, director, writer, and producer who is generally ranked alongside Charlie Chaplin and Harold Lloyd in the pantheon of silent-era movie comedians. Keaton was the original screen Stoic (also known as "The Great Stone Face"), and possibly the toughest man in show business history; during one film shoot, he broke his neck and continued with the day's shooting. Indeed, according to a popular urban legend, one Keaton himself actually cited as fact, Harry Houdini gave him his nickname when he was an infant; he had seen the young Keaton fall down a flight of stairs, and then easily getting back up again like nothing had happened, to which Houdini should have exclaimed "That was sure a buster!"

Buster literally grew up on stage as part of the Three Keatons, one of the roughest acts in vaudeville. Their most famous shtick was when Pa Joe Keaton would react to Buster's mischief by literally throwing him around the stage and occasionally into the orchestra pit or the audience — once, Joe threw Buster at hecklers who made the mistake of criticizing the saxophone playing of Myra Keaton, Joe's wife. Oh, and did we mention that they started this act when Buster was three years old?

Eventually, when the act's fortunes declined and Joe got too drunk and disorderly to work with safelynote  Speaking of safety, Keaton repeatedly stated in interviews that he never suffered an injury as a result of being thrown; their act was designed to look improvised and violent, but in reality was quite planned and controlled., Buster Keaton struck out on his own. He got into film with his good friend, Roscoe "Fatty" Arbuckle, then one of the top comedy movie stars. Following Fatty's tragic fall from grace, Keaton formed his own production company, starring in and directing some of the most innovative comedy films of his day. From this period, his full-length film The General is still considered one of the best silent films ever made. He was also never afraid of new technology: for instance, for a major silent movie star at the dawn of sound films, he wanted to get into them right away. After his company was dissolved, Keaton signed a contract with MGM. Charlie Chaplin warned him against signing beforehand, and Keaton would indeed later came to seriously regret this decision, repeatedly calling it not just the biggest mistake of his career, but his life. The best of his MGM films are the silents The Cameraman and Spite Marriage. He then began making sound pictures in which he was often teamed with Jimmy Durante.note  Unlike many silent film stars who were ruined because their voices were odd or otherwise did not match their images, Keaton's strong barritone voice and vaudeville-honed acting and singing skills allowed him to make the transition without much difficulty. He was even a great dancer, as one would expect from his acrobatic skills, though he rarely got a chance to display that on screen. Still, there was contention between him and MGM in this area. Keaton generally liked the idea of doing talkies, and especially relished the idea of getting to experiment with sound in his pictures, but noted that he was more of a physical comedian and "not a joke-teller", and absolutely hated pun-based comedy, and as such he wanted his voice to used in measure and his lines to be few and far between. MGM, meanwhile, wanted to him to primarily star in dialogue-heavy farcical comedies, which Keaton absolutely hated.

Unfortunately, stress from repeated clashes with MGM management, the loss of his independence and artistic control, and a divorce from his first wife, Natalie Talmadge (in which she was awarded sole custody of their two sons), caused Keaton's drinking to develop into outright alcoholism. During the 1930s, Keaton slipped from the spotlight. He made two-reel comedies for low-budget outfits like Educational Pictures and Columbia Pictures (the latter has since become a major film production and distribution company), and worked for MGM as a gag man (where he mentored Lucille Ball before she got her break as a television comedienne and worked as a gagman for the Marx Brothers' At The Circus). At one point he was institutionalized because of his drinking. He wed one of his nurses, Mae Scriven, possibly during an alcoholic blackout; the relationship ended disastrously (among other things, she stole his dog and sold it).

Things turned around for Keaton in the 1940s. He met and married his third wife, Eleanor Norris, who helped him get his drinking under control and sometimes worked as his partner in comedy routines. This led to Buster's engagement at France's Cirque Medrano, where he drew enthusiastic audiences. A 1949 article by James Agee in LIFE magazine (see quote above) renewed interest in Keaton, and his career picked up: he starred in a short-lived TV series; guest-starred on other shows, including The Twilight Zone, Route 66, and Candid Camera; appeared in many commercials; and performed memorable cameos and supporting roles in such films as Sunset Boulevard (playing himself), Around the World in 80 Days (1956), Charlie Chaplin's Limelight, It's a Mad, Mad, Mad, Mad World, and A Funny Thing Happened on the Way to the Forum. He even collaborated with avant-garde playwright Samuel Beckett on an unusual project called Film.

He lived to see his silent films preserved (including some supposedly lost films that actor James Mason found in a house that Keaton had previously owned) and reintroduced for a new generation, and received an Honorary Lifetime Achievement Academy Award.

He died from lung cancer at the age of 70. Funnily enough, his death was an inversion of Secretly Dying; he thought he was recovering from bronchitis, and everyone knew he was dying except him. (Don't ask us how that happened...)

His life story is told in the three-part documentary series Buster Keaton: A Hard Act to Follow.

This particular stunt was noted for being done without any trickery (and for being botched by the crew at one point; they measured it wrong and missed flattening Buster Keaton's skull by mere inches). It's reported that both the cameraman and director were too scared to watch when the stunt was performed. It's worth noting that Keaton decided a prop wall would not look realistic enough so the wall used in this scene is a real wall built to code and would have easily crushed him.

This particular stunt was noted for being done without any trickery (and for being botched by the crew at one point; they measured it wrong and missed flattening Buster Keaton's skull by mere inches). It's reported that both the cameraman and director were too scared to watch when the stunt was performed. It's worth noting that Keaton decided a prop wall would not look realistic enough so the wall used in this scene is a real wall built to code and would have easily crushed him.