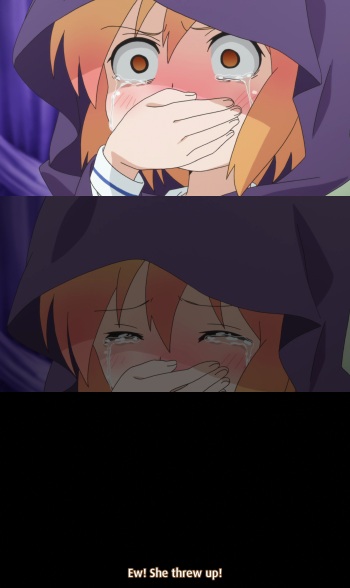 Vomit in television often has a surprising knack for avoiding the camera, usually from either actors running off-screen to be sick, the scene cutting away to something else spewing (like a burst pipe), or the character just dropping off camera when they double over. The Vomiting Cop usually exhibits this behavior.

Often done as a way of Getting Crap Past the Radar, although ironically The Hays Code that was in effect for Hollywood movies between 1934 and 1968 made no mention of vomiting or any other bodily functions. This was primarily because the censors took it for granted that filmmakers themselves found bodily fluids so disgusting that they wouldn't want to put them in their movies. Well, some of these filmmakers did want that...

There is a scientifically-explainable reason why vomiting usually isn't shown on-screen in media. Human evolution resulted in nausea being about as contagious as yawning is, as back during the hunter-gatherer days, it was very likely that any poisonous material that someone ate was also eaten by other members of their group. Thus, seeing someone throw up will result in one instinctively feeling nauseous as well; consequently, vomiting is considered one of the most universally reviled natural actions to bear witness to, explaining its frequent on-screen absence.

Contrast Vomit Indiscretion Shot, when the gory details of vomiting are explicit.

The sandwich wrap that Bob had to eat on a deal finally takes a toll on him and he vomits in front the restaurant that gave him the food poisoning in the first place.

The sandwich wrap that Bob had to eat on a deal finally takes a toll on him and he vomits in front the restaurant that gave him the food poisoning in the first place.