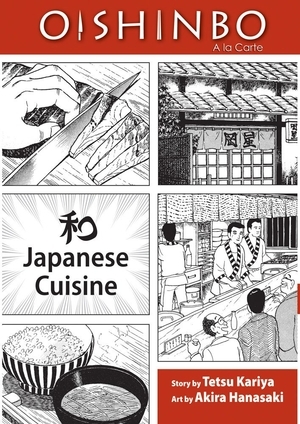 Oishinbo (literally "The Gourmet") is a manga written by Tetsu Kariya and illustrated by Akira Hanasaki. It began publication in Big Comic Spirits in 1983 and ran until 2014, when it was put on indefinite hiatus.

The Tozai News is celebrating its 100th anniversary. Part of the celebration is creating the "Ultimate Meal", one that represents the pinnacle of Japanese cuisine. The job has been assigned to Yamaoka Shiro, cynical and a bit lazy but a man with a wide knowledge of food and cooking techniques. He acquired this training from his father, Kaibara Yuzan — a man with a reputation as a premier gourmet and a nasty temper. Things go from bad to worse between the two when Yuzan agrees to assemble the "Superior Meal" for the Tozai News newspaper rival the Teito Times.

Shiro teams up with colleague Kurita Yuko and other co-workers on a quest to find the best of the best of Japanese cuisine. An interesting introduction to Japanese food, culture, and some history.

The English version is a variety of a la carte volumes, collections of earlier stories sorted by subject matter. This disrupts the storyline, but the editors try to keep the reader informed of what has occurred during the transitions.