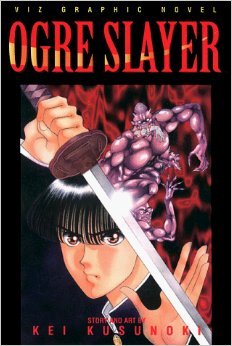 Ogre Slayer (鬼切丸 Onikirimaru) is a manga series created by Kei Kusunoki. The manga has been adapted into a 4 episode OAV which was the first production of OLM Incorporated. A prequel, Legend of Ogre Slayer (Onikirimaru-Den''), set in medieval Japan, is currently being released, by the same creator.

Ogre Slayer is about a young man who hunts ogres. The young man was born of an ogre's corpse, like the oni born of human's body, making him pure ogre blood. Though he was born like an ogre, he has the appearance of a human. Instead of being born with horns like traditional Japanese ogres, he was born with a sword. The young man doesn't have a name, but his sword is called Onikirimaru, the Ogre Slayer.