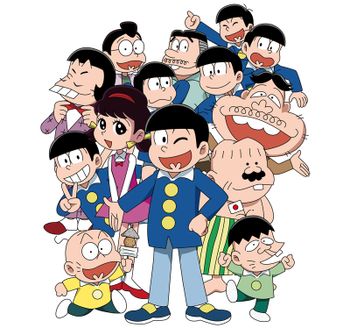 Osomatsu-kun (おそ松くん) is a classic 1960s Shōnen gag comedy written by Fujio Akatsuka. The story originally ran from 1962 to 1969 in Shonen Sunday but continued well into 1990, amassing an impressive 34 volumes by the end of its run overall.
Advertisement:

Though the stories tended to be self-contained, the basic premise centers around the mischievous Matsuno brothers— a group of sextuplets who cause more trouble than they solve around their small hometown. Accompanying them is the gaudy, occupation-switching Iyami, their collective sweetheart Totoko, their eternal Sitcom Arch-Nemesis and local oden fanatic, Chibita, and a host of other colorful townsfolk that come along for the ride.

As the years went on, this quirky little story about the Matsunos and their colleagues became sort of a cultural icon in Japan, and remains one of Akatsuka's most beloved works alongside Himitsu no Akko-chan, Moretsu Ataro, and Tensai Bakabon. The series proceeded to have two anime made for it; one by Children's Corner and Studio Zero in 1966, and one done by Studio Pierrot in 1988 that focused instead on the adventures of the wildly popular Iyami and Chibita, while the brothers took on a more secondary role. It also had several reprints in other manga magazines and showed up on a couple of ad campaigns alongside other Akatsuka characters, including an ad campaign called "Osomatsu-kun Grows Up", which detailed what would happen to the sextuplets once they all became adults and moved into the working world.

27 years after the 80s anime ended, a revival series titled Osomatsu-san was created as a Milestone Celebration for Akatsuka's (post-mortem) 80th birthday.

In 2018, the 1988 anime’s 30th anniversary brought us an English release thanks to Discotek, and official subbed episodes can be found on their YouTube channel. Crunchyroll also has this adaptation available on their website.