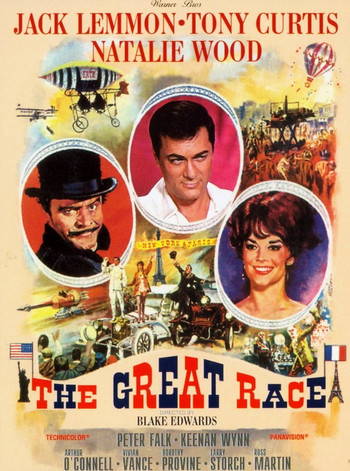 The film is (very) loosely based on the Real Life 1908 New York-to-Paris automobile race. The protagonist is The Great Leslie (Curtis), a dashing and wealthy daredevil known for setting speed records and other dangerous stunts. His evil nemesis Professor Fate (Lemmon) and Fate's sidekick Max (Falk) try to outdo him, but always fail hilariously.

When Leslie enters a westward race from New York to Paris to promote a new car, Professor Fate promptly joins the race as well, hoping to finally defeat his hated rival. Photojournalist and suffragette Maggie DuBois (Wood), intent on covering the story, enters the race too. Shortly after the start, Fate's dirty tricks eliminate all contestants except himself, Leslie, and Maggie. Later, Maggie's car breaks down and she's forced to ride with Leslie... and not long after that, Leslie's mechanic gets "conveniently" sidetracked. Should anyone be surprised that a relationship starts forming between the two of them?

The Great Race contains many homages to silent movie-era slapstick and visual gags and parodies. While not a big success in its own time it has since become something of a Cult Classic. It was also a major influence on the cartoon series Wacky Races.

Not to be confused with H. P. Lovecraft's Starfish Aliens, or the Thomas & Friends movie from 2016.