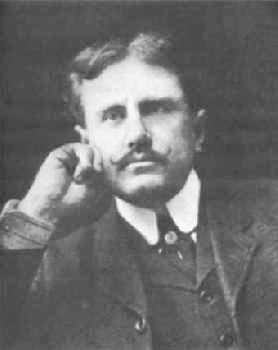 Clearly a man who likes his twist endings.
Advertisement:

William Sydney Porter (September 11, 1862 – June 5, 1910), Pen Name O. Henry, is an American writer of chiefly short fiction (the most famous piece being "The Gift of the Magi") and one novel (Cabbages and Kings). His stories are famous for their Mandatory Twist Endings, warm characterization and wit.

For some inexplicable reason—at least partially having to do with two film adaptations, which are quite good—he is most popular in the former USSR republics, where phrases such as "Bolivar cannot carry double" have become stock quotes.

The "Oh Henry!" candy bar (later associated with Hank Aaron) was partly named in homage to him. (And partly named for a boy who flirted with the girls at the candy factory.)

Works by O. Henry with their own trope pages include:

Other works by O. Henry provide examples of: