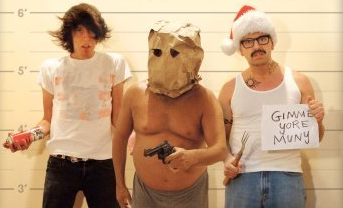 A balanced adventuring party.
"I did not rob a bank; if I had robbed a bank, everything would have been great... I tried to rob a bank is what happened, and they got me... I misspelled a note."
— Virgil Starkwell, Take the Money and Run
Advertisement:

When it comes to committing crime, (un)fortunately, not everyone is an expert... or even a professional. A good caper usually takes the talent and skill of the likes of a Classy Cat-Burglar or even a Phantom Thief to pull off, and people either have a knack for that or don't. Those who can’t pull off anything on that scale may think smaller, plan a less rewarding crime with fewer risks involved.

This trope is for those who fail even at that.

Criminals in general are seldom the brightest of folks in the first place, but there's something about Stupid Crooks that always distinguishes them from the rest of the pack. Naturally, the very fact that they seek to commit acts of crime doesn't win them any favors or admiration from anyone, but the fact that they can't even succeed at it doesn't do them any good, either. Knowing that, the escapades involving this type of criminal usually amount to one of the greatest forms of Comedic Sociopathy one can find anywhere.

Most commonly, Stupid Crooks are low-level burglars and petty thieves; other times, they may be people who don't have criminal records or have never committed a crime before but are suddenly tempted to commit one for fast cash or some other small reward. No matter what though, these guys always get something wrong. They use Paper Thin Disguises (that don't work), they rob a store that they visit daily where all the employees would recognize them, they use their real names to communicate with each other, they do all of those things at once and more! Stupidity has no limits, and that has never been truer than in instances involving Stupid Crooks.

On most occasions, Failure Is the Only Option with the crook(s) either bungling a job that has low risk and is extremely petty (like taking candy from a baby) or one that comes with greater risk in a criminal field that they have no experience with. Stupid Crooks always get caught by the cops (even when Police Are Useless for anything else) or otherwise end up having a price to pay for their idiocy. In either instance, Amusing Injuries are very likely to occur.

The few times when a crook manages to get away with anything, the matter usually comes down to a Contrived Coincidence or two and a hefty dose of subversion that allows the crook to slip by when everyone else is preoccupied with a much larger mess that was made, especially true if the character isn't actually after any plot-crucial MacGuffins and the character only serves to advance other circumstances of a story; in the very rare event that a Stupid Crook does get away with a plot-crucial MacGuffin by the end of the story, expect this to feel like an Ass Pull.

Often leads to Mugging the Monster and Bullying a Dragon. A Goldfish Poop Gang or a Bumbling Henchmen Duo is often composed of these. Weapon for Intimidation can show up in a subverted fashion where brandishing an unusable weapon (i.e. an unloaded gun) draws aggro from people who can fight back with greater force. For one reason or another, such characters are usually Too Dumb to Live. If any such character happens to draw sympathy from their failings, that character is also likely to be an Ineffectual Sympathetic Villain.

Truth in Television, obviously, as shown by all too many real reports (or more recently, videos) featuring idiotic criminals failing in amusing ways. In Real Life, this is often exacerbated by drug abuse, which makes many criminals act even dumber than they are by default.

See also: Cut Lex Luthor a Check, when someone with a habit of committing crimes could actually achieve fortune and success through more honest and legal means. A Terrible Trio can commonly evoke this trope (or, at least, the supporting characters can, if the leader is halfway competent). Often The Family for the Whole Family is similar. Stupid Crooks can also be a type of Harmless Villain. If the crook fails because he is foolishly self-confident rather than technically stupid, see Too Clever by Half.

Not directly related to Stupid Evil, although overlap is possible.

Chad Wagon is the very Fratbro esque owner of a 1950s American styled diner who acts like a character plucked right from The Fast and the Furious.

Chad Wagon is the very Fratbro esque owner of a 1950s American styled diner who acts like a character plucked right from The Fast and the Furious.