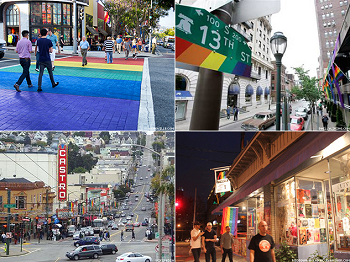 If you want to Have a Gay Old Time...
Castro's Aide: But Presidente! America tried to kill you!
Fidel Castro: Ah, they're not so bad. They even named a street after me in San Francisco.
[Castro's aide whispers in his ear]
Fidel Castro: It's full of WHAT?!
— The Simpsons
Advertisement:

A Cast Full of Gay in real life. It's the part of a major city where its LGBT+ community either lives or visits to party. Rainbow flags hang from the streetlights, and the streets are lined with gay bars, boutiques, trendy cafes, and overpriced housing. You're likely to run into any of the Queer as Tropes archetypes and their friends, see two men hold hands without fear of retribution and meet butch lesbians and manly gays who'll beat the ass of anyone who dares try.

Due to gentrification, the Gayborhood is often an upscale district, feeding the stereotype that all gay people have money out the yin-yang. Religious fundamentalists often preach about the evils of "that part of town," seeing it as a modern-day Sodom and Gomorrah, where prostitution and drug abuse run rampant, depraved homosexuals have bare buttsecks out of seedy bathhouses, and where one can't so much as bend over to pick up change without having a Leatherman on top of him like white on rice (how they know all of this is a different story).

The more touristy gayborhoods are often known as "gay meccas," as in, someplace every gay person (...who makes enough money to leisurely travel and has enough interest in the scene) should visit at least once. These areas might be separate from a big city, and quite affluent due to tourism. Stories based here tend to feed stereotypes that gay people (particularly the men) do nothing but lounge around pools and have sex all day.

Stories with a predominantly gay cast are often based in this setting. Twinks in the midst of their Coming-Out Story will visit the bars here on their first taste of the nightlife. Straight characters who come here for the first time are often in a state of wonder or paranoia towards the locals. The Gayborhood will often visually resemble San Francisco's world-famous Castro district, even if no other part of the city has a streetcar (and the famous cable cars don't actually run anywhere near the Castro). However, real-life gayborhoods

are as diverse as the cities they're based in.

In real life, gayborhoods got started under the threat of homophobia. Gays were motivated to live close to each other so they could have a community that wouldn't judge them. Many also wanted to minimize interaction with hostile police departments. For example, West Hollywood became a gayborhood because it used to be unincorporated territory under the jurisdiction of the Los Angeles County Sheriff's Department rather than the LAPD, who at the time was notoriously homophobic. In other cities, gayborhoods are either upscale parts of town where gay couples with two incomes and no kids could settle and make their lives, or working-class neighborhoods neither expensive nor crime-ridden, where gays would renovate the houses and open businesses, gentrifying the area over time until it became upscale, for better or for worse. In some cities, opponents of gentrification do not even pretend not to be motivated by homophobia.

With LGBT tolerance becoming more mainstream in many parts of the world, there's less motivation for queer people to move to the nearest gayborhood. Some are worried that widespread tolerance, though obviously a good thing overall, will reduce

the population and uniqueness of the gayborhoods and their associated culture. Indeed, thanks to this effect, gentrification, or both, some gayborhoods have become The Theme Park Version of their former selves.