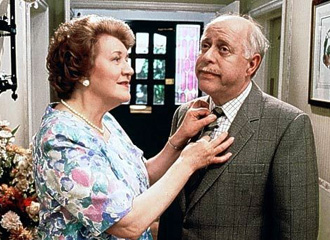 The poor guy; he squirms under the thumb of a domineering wife, very likely a Grande Dame. Her word is law, and he can only obey, with a meek and humble, "Yes, dear." We laugh at his misfortune, and maybe pity him a little.

Frequently, he will be a small figure, literally overshadowed by his behemoth of a wife. Bigger than he is, she nevertheless expects him to carry all her packages when out shopping, to run all her errands, and to care for whatever snarling pet she dotes on. All the while his own hobbies and sources of personal enjoyment will fall by the wayside ("No, honey, you can't watch the game Sunday, we're going antiquing!" — and he will).

Some of these men are resigned to the horror of their lives; others try to escape, oftentimes to their regret. There are two possibilities if the Henpecked Husband actually succeeds in standing up to his wife: Either she'll hold her ground, provoking him to divorce her and revel in the newfound freedom, or his wife will not only back down but instantly swoon and throw herself at him — she was secretly yearning for him to grow a spine all along.

A common feature in the Awful Wedded Life Dom Com genre. Originally, this trope was a subversion of expectations — a husband dominated by his wife was funny because it was the reverse of the normal, proper situation where the man was in charge of the household. After all, a real man could never be dominated by any mere woman, so the Henpecked Husband must be a wimp who deserves it. Today, the notion that the man must be the head of the family is mostly a Discredited Trope, but the idea that there's something inherently hilarious about a woman dominating a man still lingers. While cries of Henpecked Husband are sometimes raised at the slightest implication of a wife being in charge of anything, it's only very recently that it's started becoming common for the truly overpowering examples to be held up as abusive.

If it's a relationship where the two of them really love each other, this will be played even more for laughs, with the joke more likely to be not that the husband is suffering, but that he's delusional. Maybe the husband starts talking about how he "wears the pants in the family". The wife will then make a comment or suggestion, and he'll immediately cave. Yeah, he's whipped.

Compare Momma's Boy and My Beloved Smother in the case the husband is replaced by his son. See also No Accounting for Taste. In the process of slowly becoming a Discredited Trope in favor of Parenting the Husband.