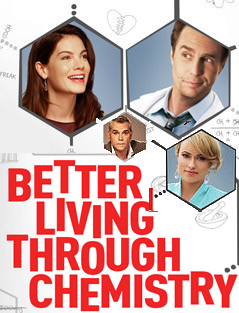 Better Living Through Chemistry is a 2014 Comedy/Drama film directed and written by David Posamentier and Geoff Moore, and starring Sam Rockwell, Olivia Wilde, Michelle Monaghan, Ken Arnold, and Ray Liotta, with the narrator role and a brief cameo by Jane Fonda.
Advertisement:

Doug Varney (Rockwell) is the primary pharmacist of Woodbury, a small town, having inherited the pharmacy from his father-in-law, Walter Bishop. He is unhappily married to Kara (Monaghan), who is obsessed with cycling, winning the annual "Woodbury Classic" bike race 5 years out of 6, and running a local spinning facility, and troubled by his lack of ability to connect to his troubled son, Ethan. One day, when delivering a prescription to trophy wife, Elizabeth (Wilde), he discovers a new obsession. Elizabeth and he have a torrid affair, fueled by his own custom pharmaceutical creations, and Doug seems to start taking control of his life, beating his wife in the Woodbury Classic and bonding with his son by committing vandalism while dressed as ninja. However, things take a downward turn.

DEA Agent Andrew Carp shows up and requires access to Doug's records as a routine matter (as a result of Bishop neglecting to properly transfer ownership). Thinking he's about to be found out, Doug and Elizabeth hatch a plan to murder her wealthy and neglectful husband, Jack (Liotta) so that they can run off together with the money. Meanwhile, Doug is spiraling into addiction, unable to keep his personal and professional life in order, culminating in a frantic cross-town trek, Doug in handcuffs, a death, the return of Agent Carp, and finally, resolution.